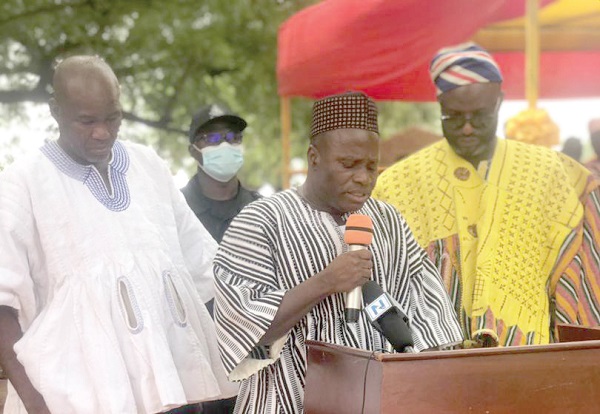 He said the current system where chiefs were appointed based on oral succession arrangements bred pockets of disputes, for which reason successions to skins must be documented to serve as a guide to all factions and families.

“With the current system, chiefs are appointed based on oral historical successions, which sometimes brings about litigations because some factions try to use various means to ascend the skin when they are not even qualified.

“But when we have a documented succession plan, nobody can circumvent the system. Elsewhere, it is working and I believe that if the Regional House of Chiefs and the Overlord of Mamprugu take it into consideration, it will help a lot,” he stated.

Mr Yidana made the call at the 20th anniversary celebration of the Paramount Chief of the Wungu Traditional Area, Naazori Saaka Sulemana at Wungu last Saturday.

The event, which was also used to launch the Wungu Paramountcy Education Development Fund, brought together representatives of various political parties, chiefs, academia and sons and daughters to network and dialogue on pertinent issues affecting the development of the area.

Mr Yidana stressed the need for effective collaboration among the traditional authorities and the political heads to resolve all outstanding land and chieftaincy disputes in the region.

He said conflicts and development were mutually exclusive, hence the need for all actors in land and chieftaincy disputes to soften their stance for amicable resolutions in the interest of the region and the nation.

He pointed out that decisions taken by the regional, municipal, district security councils or committees, either on land or chieftaincy, were borne out of the spirit to place the interest of the nation and its citizens first before any other consideration.

“I wish to call on you to try and resolve all pending land boundary issues in your jurisdiction. Some of the issues are between chiefs who owe allegiance to you while others are between chiefs in your territory and others. His excellency the President directed me and my colleague in the Upper East to support our chiefs to resolve all outstanding land boundary issues.

“It is hoped that you will call a meeting between you and your sons namely: Yagaba, Yirizesi, Nangurama and Kaba’asi chiefs to discuss pertinent issues bordering on land related issues. We will give you the needed support at the political level to get these issues addressed,” Mr Yidana added.

Mr Yidana bemoaned the wanton destruction of the environment through sand and stone winning, lumbering and charcoal burning which had depleted the forest cover.

The situation, he said, was accounting for global warming and its attendant consequences and called on all to intervene to minimise the depletion of the forest cover.

While eulogizing Naazori Sulemana for his contribution towards the development of the region, the regional minister described his reign as “two decades of exemplary leadership, consolidation of peace, development, nostalgic and fond memories”.

For his part, Naazori Sulemana thanked the chiefs and people of the region for their support and cooperation which had made his reign a success.

He admonished all to be law-abiding and collectively work towards the development of the area, saying that “Mamprugu was not built on a silver platter, our forefathers sacrificed and laid their lives to build the kingdom so we must also collectively work to move it to the next level”.

Meanwhile, the Vice-President, Dr Mahamudu Bawumia, donated a sum of GH¢50,000 to the development fund.