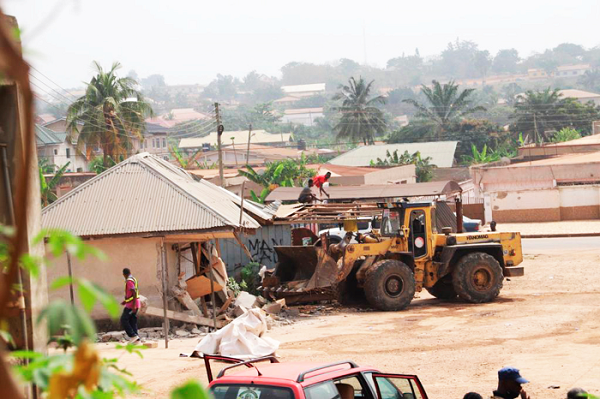 A bulldozer pulling down a structure at the washing bay

A washing bay and its adjoining welder's shop that were hindering the reconstruction of the Chirapatre Estate roads, have finally been pulled down.

A combined team of security personnel and officials of the Asokwa Municipal Assembly last Wednesday morning stormed the facility and ensured that the structures were pulled down to pave the way for the reconstruction of that section of the road.

According to the assembly, the owners had been notified on numerous occasions to evacuate that parcel of land and the final deadline elapsed last Saturday. However, he said, the operators were still using the facilities which made the assembly finally move to the site to pull down the structures.

When the team arrived at the premises, both operators of the washing bay and the welder's shop were busy going about their usual duties.

Some residents were seated and waiting for their cars to be washed, and so the team gave them (operators) some time to serve their immediate customers before the demolition.

In an interview with the Municipal Chief Executive, Mr Akwannuasa Gyimah, he said there was no way authorities would have sat on the fence and looked on while private developers took over government property, but they (assembly) needed to execute their mandate with a human face.

"We will continue to work in the interest of the people we serve," he told this reporter, and commended residents for their patience during the processes leading to the evacuation of the developers.

Some residents who spoke to the Daily Graphic said they were elated and grateful to the assembly for ensuring that all obstructions hindering work on the designated road were removed.

An interim Committee Chairman of the Chirapatre Residents Association, Mr Frank Nyarko, who led a peaceful demonstration barely a week ago on the same matter, commended the assembly for walking the talk.

"We are very grateful Mr Gyimah. You have shown that you are a visionary leader," he said, adding that the community would continue to support his development agenda in the municipality.

"These are the kinds of leaders we need to help develop our area," an 85-year-old resident, Mr Anthony Adusei Poku, who with the aid of a walking stick, joined last week's demonstration, told this reporter.

He appealed to the contractor, Contracta Construction Limited, a Brazilian firm executing the project, to double up and execute the project since the main obstruction to their work had finally been pulled down.