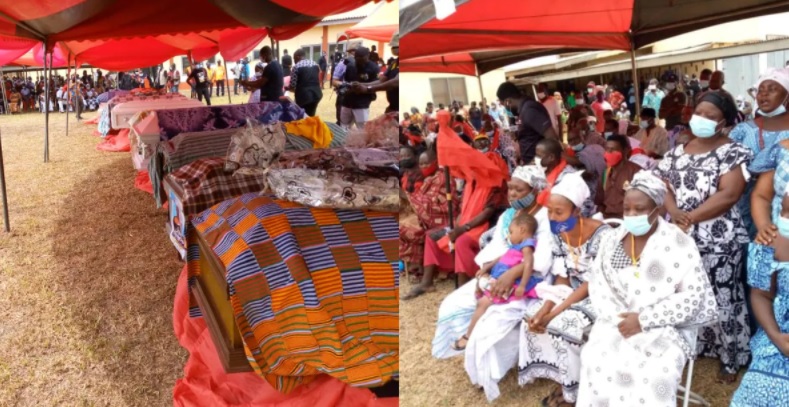 A joint burial service for 11 children who drowned while swimming in the sea at Apam in the Central region has been held at Apam.

In all a total of 13 bodies have been retrieved as of now in the accident where about 20 children were said to involved.

Two teenagers survived the drowning disaster. 13 bodies have been retrieved as of now and one has already been buried.

The traditional council in the area on Monday, performed rites to pacify the sea gods following claims that the victim’s defied them.

One cow, three sheep, 12 fowls, 33 tubers of yam, and three cartons of gin [schnapps] were offered to the gods by a traditional priest on Monday, March 15, 2021.

The two survivors are traumatised about the incident.

Simon Dadzie, 15, and Godfred Apratse, 14, said swimming had always been part of their leisure activities, but they never envisaged that it could result in such a tragedy.

“The unfortunate incident just happened in a flash and all that we could remember was that we entered the sea to swim but later opened our eyes and found ourselves in hospital receiving treatment,” they said.

Monday's burial service had earlier been slated for March 11, 2021, few days after the bodies were retrieved.

But the Gomoa West Security Council explained that it was postponed to March 16, 2021 due to the rituals which needed to be undertaken before the burial.

Some family members at the premises of the St. Luke Catholic Hospital in Apam said they will miss their loved ones following the tragedy.

Joseph Narh, one of the dead teenagers’ father, said he was days away from leaving Ghana with his family to Spain.

“I came from Spain a couple of weeks ago and my plan was to carry them [my family] with me. So I came down for just a month and was to leave with them. It has been a big blow,” he said.

A government delegation led by the Minister of Fisheries and Aquaculture, Mavis Hawa Koomson was at the burial service.