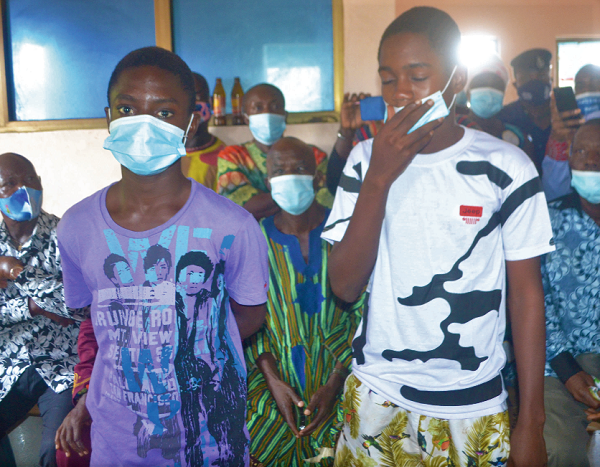 Two teenagers who survived the drowning disaster at Apam in the Central Region, which claimed the lives of 12 teenagers, say they are traumatised about the incident.

Simon Dadzie, 15, and Godfred Apratse, 14, said swimming had always been part of their leisure activities, but they never envisaged that it could result in such a tragedy.

“The unfortunate incident just happened in a flash and all that we could remember was that we entered the sea to swim but later opened our eyes and found ourselves in hospital receiving treatment,” they said.

The two survivors were speaking in an interview with the media when the Minister of Fisheries and Aquaculture Development, Mrs Mavis Hawa Koomson, on behalf of President Nana Addo Dankwa Akufo-Addo, led a government delegation to commiserate with the bereaved families last Wednesday.

On behalf of the President, the minister presented GH¢36,120 to offset the cost of the performance of traditional rites, autopsy, burial and funeral of the victims.

Dadzie said the incident shook him to the core as one of the victims was his classmate, adding “it has been very difficult for me to come to terms with the sad incident”.

He indicated that since the disaster, he got frightened anytime he remembered that fateful day.

Recounting the incident, Dadzie said he and his friends decided to go to the beach by using a different route in order not to be noticed by some adults who would have prevented them due to the restrictions on activities at the beach in the wake of the COVID-19 pandemic.

He said the initial plan was for them to play football, but they later decided to swim.

In the process of swimming, he said, there was a strong tidal wave which swept them away.

For his part, Apratse disclosed that he went to the beach to play football but later entered the sea to swim, saying “immediately I entered to wash down, there was a strong tidal wave that carried everyone away”.

“What I remember is that I collapsed and when I became conscious, I realised that I was on admission at a hospital.

“I must admit that the tragic passing of my friends has become a nightmare for me,” he said.

Speaking during the meeting, the Member of Parliament for Gomoa West Constituency, Mr Richard Gyan-Mensah, urged the media to be circumspect with their reportage on the issue, as the victims were children whose families were still mourning their loss.

He also advised people to respect the privacy of the families and also report the incident with the sensitivity and tact that it deserved.

Meanwhile, the Daily Graphic has gathered that the chiefs and elders are preparing to perform the necessary traditional rites to pave the way for the mass burial of the departed children on Tuesday, March 16, 2021.

According to the elders, the performance of the customary rites to pacify the gods at a place considered sacred to the community began yesterday and would end on Monday, before the burial of the children the following day.

Apam, the district capital of Gomoa West, was last Sunday thrown into a state of mourning when about 20 teenagers drowned in the sea.

Two families have also informed the police that their two children had not returned home since last Sunday.