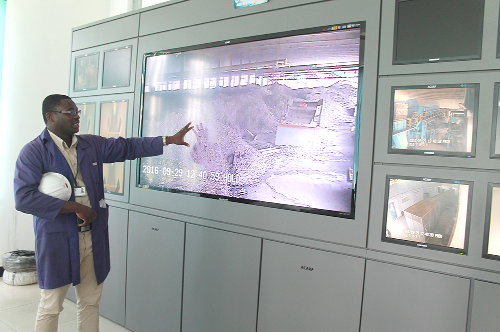 Mr Samuel K. Ntumy, Plant Engineer, ACARP, explaining how the control room where various plants are monitored works during a visit to the facility Follow @Graphicgh

Accra never had a landfill until the construction of the Kpone landfill near Tema in 2010. What it had were pockets of old quarry which were quickly turned into dump sites to receive garbage from both homes and industries.

Currently, there are no more old quarries in the capital and waste management companies in Accra are relying on the Kpone landfill which was built for Tema and its environs.

The Nsumia Dumpsite, which is a 75-km turn-around from Accra, is located at Nsawam and its almost full. 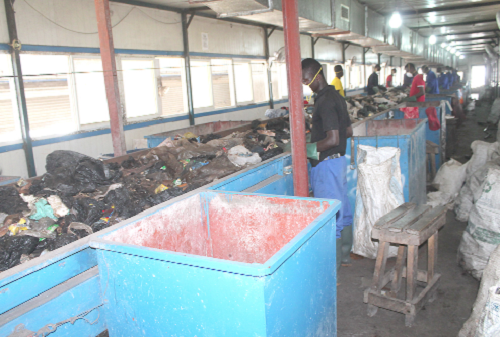 At a time when dump sites were popular, some communities agitated against dumping in their communities through demonstrations, which often resulted in pile-ups in the national capital.

Some of the communities, which have been up in arms against city authorities and have been in the news since 2001 for taking their demands to the streets clad in red attire and arm bands to signify their uncompromising stance include Mallam, Oblogo, Kwabenya, Achimota and Pantang, near Abokobi.

At all these locations, authorities were forced to close down the landfill sites as they succumbed to the pressure from community members.

Not too long ago, the Ga East Municipal Assembly was under pressure, receiving threats from residents near the landfill site close to Abokobi, resulting in the Environmental Protection Agency (EPA) giving the assembly an ultimatum to close down the dumpsite because of the environmental and health hazards the site was posing to residents.

Communities have always been sceptical and have not been prepared to give out their lands to be used as landfills for the dumping of waste, and ,therefore, there was the need to find a lasting solution to the management of the solid waste.

It was that need for an effective management of the over 2,500 tonnes of waste generated daily in the city of Accra that gave birth to the concept of the processing of solid waste, and formed the basis for setting up the Accra Compost And Recycling Plant (ACARP) in 2012 at Adjen Kotoku in the Ga West Municipality.

The first of its kind to be put up through a Public Private Partnership (PPP), the compost plant produces about 40 tonnes of compost (800 bags weighing 50kg each) daily from organic waste for agriculture, while its recycling wing recycles plastics for export mainly to India and China.

However, the demand for the compost largely outstrips its supply, while in view of a government subsidy, farmers are able to procure a 50 kg bag of compost at GH¢10 instead of its actual cost of GH¢30.

The plant comprises an observatory or control room, sorting, composting, recycling and waste water treatment wings and processes waste manually and mechanically through the use of trommel screens also known as rotary screens. Plastic bottles are crushed and baled for export, while high density plastics are pelletised for manufacturing companies.

Speaking to the Daily Graphic, the Managing Director of the plant, Dr Richard Amponsah, said “we plan to make Accra Compost a waste management hub. In other words we want to, in the next five years, process all kinds of waste here.” 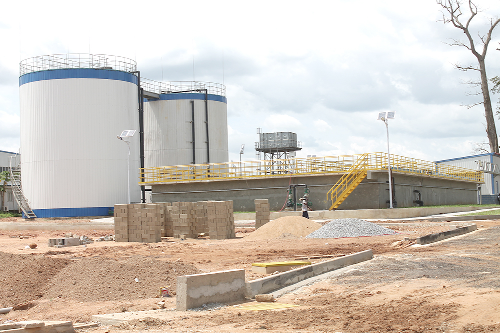 The next five years

Five seems to be the magic number for ACARP because it hopes to completely transform its operations in the next five years as part of its strategic plan.

According to Dr Amponsah, although currently when waste other than organic and plastics are sent to the facility they are turned back, in the next five years, ACARP hopes to also process electronic and industrial waste, while medical waste would be processed by another facility.

ACARP now processes 600 tonnes of solid waste on a daily basis  and recovers 75 per cent of the waste but plans to increase the volume of waste it works with to about 1,500 tonnes in five years.

“We want to make ACARP an education centre for waste recycling as students from the universities come in yearly for internships and also to do their project work,” Dr Amponsah also indisaidcated.

The waste water treatment plant is also expected to treat 1,500m3 of liquid waste from about 90 cesspit emptiers daily when it starts operation.

The ultimate plan is to have similar plants such as ACARP in all the 10 regions of Ghana, as well as two additional mobile facilities in the Western and Eastern corridors of Accra to ensure effective waste management throughout the country, Dr Amponsah said.

The ACARP managing director intimated that a similar plant under construction in Kumasi was 90 per cent completed, while feasibility studies had already been conducted in Tamale and Takoradi for similar plants to be constructed.

“It is just left with the installation of the equipment but the civil works are almost complete,” he stated.

When completed, the Kumasi plant, which is situated on about a 100- acre piece of land and has a bigger capacity, would have screening, sorting and composting wings, as well as a block of offices.

But the ACARP facility is not without challenges, some of which are the need to urgently replace mobile and permanent obsolete equipment and expand facilities with a capital injection of close to €30 million.

Dr Amponsah stated that one of the huge challenges encountered in recent times was the sudden upsurge in waste from Accra to the facility in June, which the current facilities could not cope with.

Also, he said a recent delay in the release of the quarterly District Assembly Common Fund (DACF), which is used for the payment of management or tipping fees as well as salaries also hampered operations.

However, the managing director was very optimistic that ACARP was well placed to become a leader in the West Africa sub region as far as waste management was concerned.