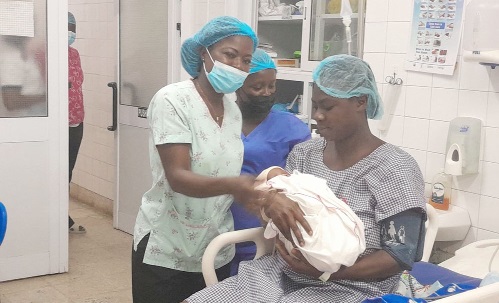 Faustina Donkor (left), Senior Staff Midwife in charge of the afternoon shift of the Delivery Ward of the Eastern Regional Hospital, admiring the baby delivered by Esther Dede
30.5k Shares

Ghana recorded 230 new births in nine major health facilities across the country on Christmas, Boxing and New Year days over the Yuletide.

Female babies formed the majority of 126, with the males numbering 104.

At the country’s premier hospital, the Korle Bu Teaching Hospital, Augustina Tawiah and Maclean Kwofi report that 82 births were recorded on the three ‘special’ dates.

Sixty deliveries were recorded at the hospital on Christmas Eve, Christmas Day and Boxing Day.

According to the Public Relations Unit of the hospital, the first child delivered on New Year’s Day, a female, was at 1:20 a.m.

From Sunyani, Biiya Mukusah Ali reports that 10 babies — made up of six females and four males — were delivered at the Sunyani Regional Hospital on Christmas and Boxing days.

Seven of the babies, comprising five females and two males, were born on Christmas Eve, while two males and a female were also delivered on Boxing Day.

All the 10 babies and their mothers were in good health when the Daily Graphic visited the facility during the period.

Some of the mothers and their babies had since been discharged.

A midwife in charge of the maternity of the hospital, Mrs Rebecca Asare, advised pregnant women to visit the nearest health facility as soon as they conceive.

The Komfo Anokye Teaching Hospital in Kumasi recorded 23 babies on both Christmas and New Year’s Day, reports Kwadwo Baffoe Donkor from Kumasi in the Ashanti Region.

From Koforidua, Haruna Yussif Wunpini reports that 30 babies were delivered at the Eastern Regional Hospital and the Koforidua Polyclinic during the Yuletide and on New Year's Day.

Out of the number, 13 were delivered normally, while the remaining 17 were through caesarean section.

The Senior Staff Midwife in charge of the afternoon shift of the Delivery Ward of the regional hospital, Faustina Donkor, said this year's number of deliveries was lower than that of last year.

She explained that education on family planning, especially to women, had led to the reduction in pregnancies and subsequent new births.

At the Koforidua Polyclinic, a medical officer, Ruby Dornyo, attributed the low number of births during the festivities to the carving out of a new municipality, the New Juaben North Municipality from the original New Juaben Municipality.

She explained that as a result, some expectant women opted to deliver at the health facilities in the newly created municipality.

Thirty-eight new babies were delivered at the Bolgatanga Regional and the Bongo District hospitals on Christmas and the New Year days, reports Gilbert Mawuli Agbey from the Upper East Region.

Two mothers, who successfully went through delivery on Christmas Day, Mary Nyaabila and Clementia Ayine, thanked God for seeing them throughout their period of pregnancy and safe delivery.

From Cape Coast, Shirley Asiedu-Addo reports that 22 babies were born on Christmas and the New Year days at the Cape Coast Teaching Hospital.

There was no maternal or baby mortality on the days at the hospital.

The gesture was to show love as part of the telecommunication company’s social responsibility activities.

Statistics obtained from the Labour Unit of the hospital indicated that six of the deliveries on Christmas Day were through Caesarean section.

On Boxing Day, eight more deliveries of six females and two males were recorded at the facility, bringing the total deliveries for the two days to 25 compared to 27 deliveries recorded in 2021.