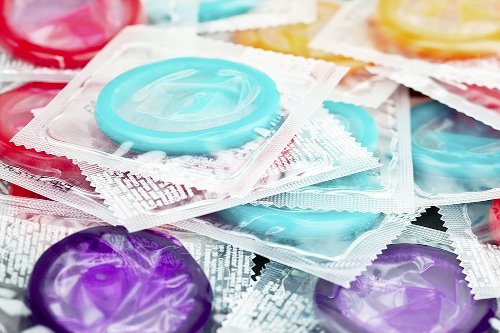 Condoms are generally ruled as a necessary evil. While they protect us from the dangers of STIs and help with pregnancy prevention, they also mute a large part of the sensations that make intercourse so great.

For many, sex with condoms has been likened to showering with a raincoat on. Sure, sensations aren’t totally blocked, but they’re certainly reduced.

As a result, many chose to forego preventative measures by foolishly opting to go in naked, and as most know, the risks include winding up with a “surprise” two weeks later or some incurable or at best, unpronouncable, disease.

Although we can understand (we’ve all been there), the facts point to using protection as the best policy.

It’s also important to note that just because the person you’re seeing isn’t at risk of getting pregnant, for whatever reason, it doesn’t reduce the need for a condom. Prevention of STIs is a shared responsibility and should be treated as such.

If you’re in a trusted or long-term couple, you'll want to work out a clear prevention strategy; talking it over will eliminate misunderstandings or failed expectations.

After all, sex and relationships are all about trust and communication.

This all said, condoms make up a huge industry and the options for getting your mojo on are better than ever, with companies continually working to come up with innovative ways to increase pleasure while being safe.

Here, we’ve compiled what we think is important to consider when choosing a condom. Enjoy!

• Condoms For Everyday Use

• Condoms To Spice Things Up

• Condoms Perfect For Your Size

Key Factors To Consider When Choosing A Condom

Size: This is probably the most important element to consider when buying a condom.

Shoot too big and it will be likely to slip off, yet too small and it will squeeze in an unpleasant way and could break.

Thankfully, there are a lot of models made to suit a variety of sizes, from very small to very big.

Note: If you don’t know your size, pull out a ruler and check out our Giant Guide To Penis Size to see how you measure up.

Material: Most people are okay with the typical latex condom, but now there’s a greater variety of options for those with latex allergies or for those who simply prefer a different feel.

Especially if you have a steady partner, discussing and finding the options that suit both of you is important, and a good act of respect and communication.

Thickness & strength: Some condoms are made thinner to provide more sensitivity (i.e. more sensation), but these are also more fragile and more probable to snapping in action.

On the other hand, thicker condoms ensure safer sex, even when it gets rough.

Texture: A lot of condoms out there come in a variety of textures, like studded or ribbed. Although these options could provide some added excitement to your sex life, don’t assume your partner shares the same preference as you — especially since, if you’re the one wearing the condom, they’ll be the ones feeling it most.

Flavour: Sometimes paired with a matching flavoured lube, flavoured condoms should also be treated with similar reservation as textured condoms.

If it helps, compare flavoured sex paraphernalia to a perfume or cologne — it’s an intimate addition to the senses that could be off-putting for someone who prefers going au natural.

Climax control: These are condoms made with a tiny amount of benzocaine, a local anesthetic designed to delay orgasm by slightly numbing the nerve endings on the penis.

Usually recommended for those with premature ejaculation anxieties.

They are just as effective in avoiding pregnancy and in protecting against STIs, fitting inside the vagina like a bag to trap sperm and keep it from entering the baby-making zone.