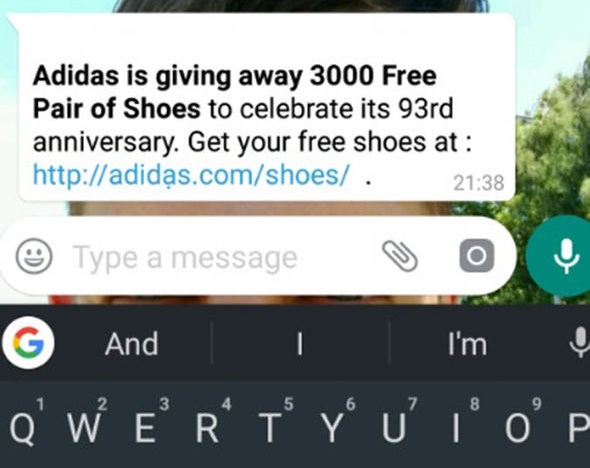 WhatsApp users are, once again, being targeted by a malicious scam that has already seen thousands duped.

The new message claims to be from Adidas and offers WhatsApp users the chance to be part of a free giveaway.

However, experts are warning that it’s actually elaborate scam which could end up with personal details being handed to cyber criminals.

The message, which appears to come from an official Adidas website, claims: “Adidas is giving away 3000 Free Pair of Shoes to celebrate its 93rd anniversary. Get your free shoes at: Adidas.com/shoes.

According to cyber experts at DomainTools, the cyber campaign shares an IP with around 244 other domains, and is getting a plenty of vistors.

Tim Helming, Director, Product Management at DomainTools researched the Url and explained: “This Domain was registered on 31st January 2018 under a private registration.


"It shares an IP with around 244 other domains.

“One interesting thing is that it has an Alexa ranking of around 70K - that's pretty good for a scam domain.

“This scam has obviously caught a lot of people’s eye - it's getting a ton of traffic.

“Many illegitimate sites look virtually identical to the real thing.

“This is where looking closely at the URL can make a real difference for staying safe online.”

Hackers sometimes disguise hidden website in what appears to be a real domain name but there is a simple way to check if a site is legitimate.

By hovering your mouse, or finger on a smartphone, over the link to the website, a pop-up window will reveal its true identity.

Other advice includes always make sure you stay alert to messages that appear on social media or from people you don’t know.

It’s rare for companies to send out competitions via services such as WhatsApp and, if it looks too good to be true, it probably is.

This latest WhatsApp scam follows a recent alert over a message claiming the company was about to start charging customers.

The message, which began doing the rounds earlier this year, suggests fans of the app must begin paying to keep using it.

Clearly 99p doesn’t sound very much but users are being warned NOT to click on the link provided in the message.

Since 2016 WhatsApp has scrapped all fees with the company saying: “We're happy to announce that WhatsApp will no longer charge subscription fees.

"For many years, we've asked some people to pay a fee for using WhatsApp after their first year.

"WhatsApp will no longer charge you for our service."