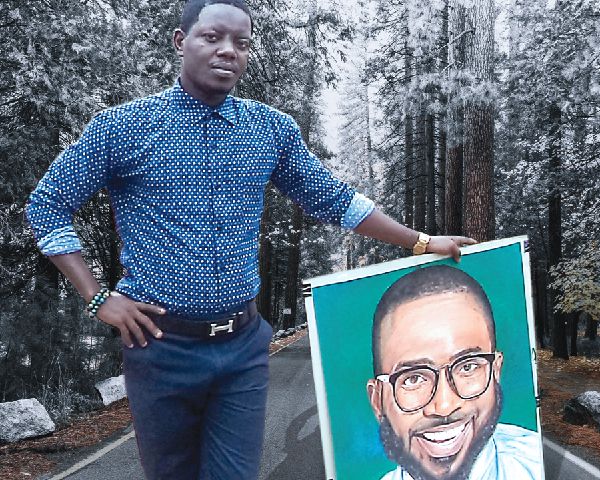 Not everyone is able to chase their dreams and accomplish them especially when they find themselves in a good paying job but  pencil artist, Simon Osei Addo is one of those who have been able to do just that.

As a Principal Technical Officer at Ada West District Assembly, Simon always has loads of administrative work to attend to and his detail for excellence which he claims attract loads of praises from his superiors couldn’t provide the satisfaction he always craved for.

So two years ago, he started “flirting” with his first love— fine arts and that has brought joy and a lot of smiles to him. And now, the old student of Labone Secondary School is convinced he has great skills to now go commercial.

However, he hasn't been so impressed with the recogntion given to fine arts although he acknowledged its importance in defining a cultural identity.

In a chat with the Daily Graphic about the prospects of fine arts, Simon said the significant role of fine arts has been underestimated in our part of the world.

While the more developed countries are taking advantage of the fine arts to drive a development agenda, he mentioned that same cannot be said here in Ghana.

“The arts is a very powerful tool for communication and it is not surprising that the white folks patronise these works more than the indigenes.

“A piece of artwork can communicate better than a million words and that is why artisans are important in every sphere of our lives, “he said.

He also noted that government support of an arts event such as the Chale Wote festival which celebrates the diversity of the arts was a step in the right direction in highlighting the significance and influence of the arts.

Simon’s love for the fine arts was nurtured at Labone Senior High School where he studied Visual Arts and majored in picture making at the Takoradi Technical University.

Even though he had desired to be a full time artist, he said the fear of not making good income forced him to abandon that move.

“I have come to the realisation that I cannot live without the arts that’s why I’m still involved with it despite my busy schedule. It’s my hope that it will become very commercial so that I can quit my job and give it my full concentration,” he stated.

Presently, Simon who takes a lot of inspiration from Nigeria’s Klevin Okafor and renowned French pencil artist, Charles Lavasto, said his only desire is to have his works displayed in a gallery or at various arts exhibitions.