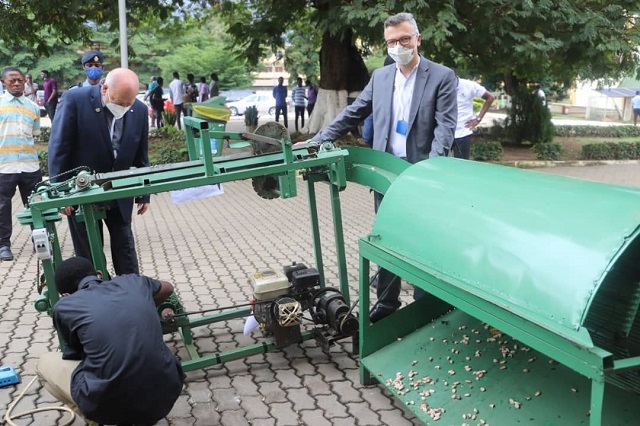 The Department of Mechanical Engineering, College of Engineering of the Kwame Nkrumah University of Science and Technology (KNUST), has manufactured a Solar-powered cocoa pod breaker and a separation machine to help address cocoa beans damage, one of the main challenges with the cocoa pod breaking process.

The safe removal of the beans from the pod is a very necessary process in the cocoa value chain. However, the absence of machines for breaking or splitting the beans in the Ghanaian market has ensured the process is carried out manually.

Exhibition
"This machine will avert fatigue, risk of injury and damage to the beans, low productivity through the use of machete", the Provost of the College of Engineering, Professor Mark Adom-Asamoah told the media during an exhibition of some inventions at the College.

This was during the 9th KNUST Summer School, held under the theme: "SDGs and Universities: Action Towards KNUST's Mandate at 70 and Beyond”.

The four-day programme, which ends on Friday is expected to tackle a number of national issues and make recommendations for national development. It was in collaboration with Clean - Africa e.V, a German NGO.

Efficiency
He said the machine is very efficient and it is able to split 60 cocoa pods per a minute.

"It can separate 97 per cent of the beans from the pod", he said, and added that its efficiency has significantly improved.

Redesigning
He said after severally analysing the first machine after its manufacture, the team later realised the pod was not well clamped on the conveyor, and the separation process was also not properly done, hence affecting the machine's performance and efficiency.

He said the machine would soon be mass produced to serve the needs of farmers.

The Provost explained that the machine is made up of two conveyors with loaders and two blades (one at the top and the other at the base), and that the load is run by a prime mover.

A demonstration showed once the pods are pushed between the blades, they are split into two halves.

The two halves then fall in a separator which separates the beans from the pod. The beans then fall on a receptacle below and the husk thrown.