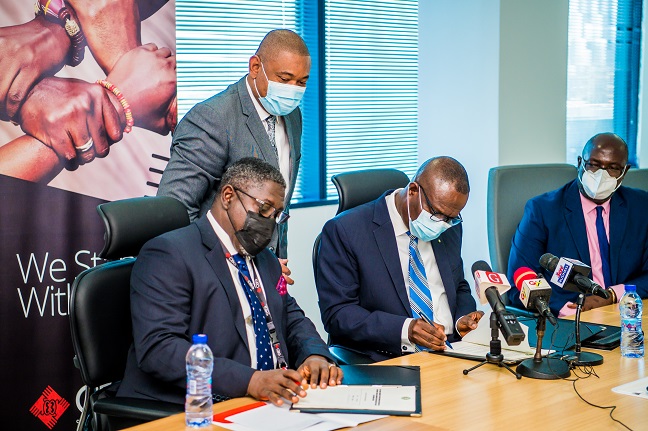 Managing Director of CBG, Mr. Daniel W. Addo and President and Chairman of the Board of Directors of EBID, Dr. George Agyekum Donkor signing off the loan deal.
30.5k Shares

Officials of the two financial institutions, led by the President and Chairman of the Board of Directors of EBID, Dr. George Agyekum Donkor and the Managing Director of CBG, Mr. Daniel W. Addo, signed off the deal yesterday, May 17, 2021 (today, Monday) at a brief ceremony held at the CBG head office in Accra.

Historic deal
Dr. George DONKOR described the deal as historic as it embodies EBID’s development commitments in the ECOWAS member states to address the huge infrastructure deficit within the sub-region.

He said it also aligned with Ghana’s developmental agenda to boost socio-economic growth with the improvement of road infrastructure as a key driver, and expressed the hope that the loan facility to CBG would provide an impetus to bolster the government’s development initiatives.

He said EBID has so far invested over $2.8 billion to promote the development of various sectors in the ECOWAS community in the areas of health, agriculture, energy, hospitality, trade, telecommunications, manufacturing and infrastructure, among others.

Great partnership
The Managing Director of CBG, Mr. Daniel W. Addo who also described the agreement as historic, said the official signing ceremony was “the culmination of a long period of discussion and negotiation” whose conclusion is a clear endorsement of the bank’s balance sheet, and also of the franchise built over the years CBG has been in operation.

“We look forward to mutually beneficial relationship with EBID. We are positive that this is the beginning of a long relationship that will see us leverage EBID’s balance sheet and utilize the funding sources for the benefit of our customers in Ghana, particularly the SME customers who are our key mandate.

Mr. Daniel Addo told the Daily Graphic in an interview that the loan is payable over six years with one year moratorium at a very competitive price. He also said the $50 million facility was a good start for a healthy partnership with EBID, and came to augment other financing sources available for growing the economy.

CBG, considered one of the largest banks in Ghana, has a balance sheet of GH¢10 billion and 114 branches across the country.

Core to the agreement, the two institutions agreed that the loan will be used to augment CBG’s financing scheme to private construction companies in the execution of key road projects within the country, and that throughout the six-year tenure of the facility, EBID and CBG will undertake to ensure that the road infrastructure projects to be financed complied with the provisions of the national and international institutional framework on sustainable development and environmental protection.