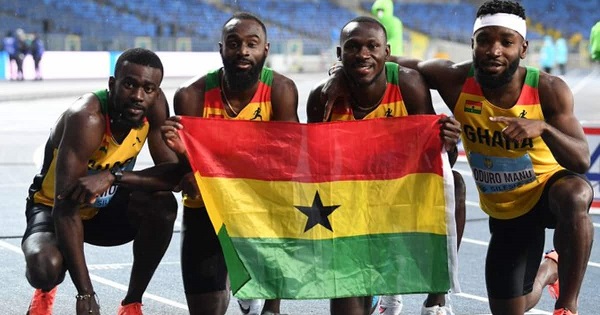 Ghanaian athletes are gearing up for a showdown with the world’s best track and field stars at this year’s World Athletics Championship which commences on Friday, July 15 in the US city of Eugene, Oregon.

Ghana last won a medal at track and field’s biggest outdoor competition in 2005 when long jumper Ignatius Gaisah and heptathlete Margaret Simpson were decorated on the podium but many years later Benjamin Azamati carries the nation’s hope in the competition on the back of impressive performances this season.

Azamati is the new poster boy for athletics and goes into the competition on the back of impressive performance this year, having set a new 100 metres national record of 9.90 seconds -- the ninth fastest time in the world this year – and recently won the 100m at the WANDA Diamond League meet in Paris.

The West Texas A&M University star and the NCAA Division II best athlete over 100m and 200m will lead the Ghanaian team by running in the short sprint event and the 4x100 metres relay.

Men’s 200m national title holder Amoah will be the busiest Ghanaian athlete as he participates in the 100m, 200m and 4x100m relay.

This year the Coppin University star ran his first sub-10 seconds (9.94s) over 100 metres on April 23 and hopes to make a good impression in an event that has big name stars vying for honours.

In addition to his favourite 200m, Amoah will team up with his Coppin University teammate Oduro and UK-based Safo-Antwi for the 4x100m relay, with Yeboah as the reserve athlete.

Amankwah is also competing at the World Championship for the first time after making the qualification mark in the men’s 800 metres and recently winning the two-lap race at the Stars & Stripes Classic in Marietta, Georgia, with a time of 1:45.14 minutes.

However, all eyes will be on Azamati and the relay team which made it to the final of the Tokyo Olympic games last year.’

Fuseini Bawah, CEO of the Ghana Athletics Association (GAA), told the Graphic Sports that he had high hopes in the team, particularly in Azamati and the sprints quartet”, which has the seventh fastest time in the world at the moment.

“We are going much stronger than we went to Poland [2021 World Athletics Relays] and the Olympics, so I’m very optimistic,” Mr Bawah said.

Former national 100m record holder and the first Ghanaian to run the distance under 10 seconds, Leonard Myles-Mills, told the Graphic Sports yesterday that he was hopeful of a positive outcome from the World Championships.

“The guys are really ready to go and compete. Azamati’s name has been the talk in town with good performances and so on paper he should make it to the men’s final and even win a medal, he should place top three. But it’s a different ball game altogether when they get there.

“He’s been impressive in the US collegiate athletics and did very well when he competed with some of the big name professionals in Europe this season, so he will not be overawed when he competes with all the other top performers,” said Myles-Mills who competed in the 2002 World Championship in Budapest.
For the Ghana athletics chief, the team has a strong technical support with head coaches Christian Nsiah and his assistant, Elorm Amenakpor (the sprints coach of the University of Ghana now studying at West Texas A&M University) handling the athletes. In addition, Acquah and Azamati have their personal trainers, James Sean Bardy and Jamie Ian Lyle Wilson, respectively handling them alongside the Ghanaian coaches in the run up to the July 15—24 championships.
Ghana’s delegation to the competition will be led by the Chief Director of the Ministry of Youth and Sports, Alhaji Hafiz Adam, and includes the President of the GAA, Afelibeik Ababu, and Mr Bawah.
For the GAA boss, the presence of the Chief Director of the Sports Ministry was indicative of how highly the government took the competition and said the support the team had received from the Minister of Youth and Sports, Mustapha Ussif, was highly commendable and that he was hopeful it was the sign of better assistance for athletics from the government in the future.