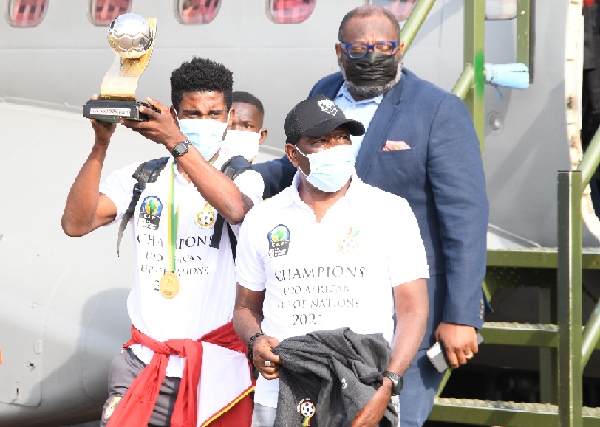 Mr Mustapha Ussif, Minister of Youth and Sports, and some officials of the ministry and the Ghana Football Association welcoming the Black Satellites team back home. Picture: EBOW HANSON
30.5k Shares

The victorious Black Satellites returned home as heroes yesterday, after winning the U-20 Africa Cup of Nations tournament by two goals against Uganda in Mauritania last Saturday.

The contingent of players and officials arrived aboard a military aircraft (Flight 551) at the Air Force Base at Burma Camp at exactly 4 p.m.

They were met by the Minister of Youth and Sports, Mr Mustapha Ussif; the Vice-President of the Ghana Football Association (GFA), Mr Mark Addo; the Chief Executive of the National Sports Authority, Professor Patrick Twumasi, among other dignitaries.

Members of the Ghana Supporters Union created a carnival atmosphere yesterday — the exact opposite of the team’s relatively quiet departure for the tournament — as Mr Ussif led the players and officials from the tarmac to the arrival hall where an elaborate ceremony was held to welcome and congratulate the triumphant team on winning a fourth continental title and reclaiming it for the first time in 12 years.

The minister acknowledged the team's impressive feat and said they could not have gifted the country with a better present to celebrate its 64th Independence anniversary, noting that the entire country was proud of their achievement.

He told the players and officials that President Nana Addo Dankwa Akufo-Addo was extremely excited by the honour they had brought to the nation and was looking forward to meeting them at the seat of government, the Jubilee House.

Mr Ussif acknowledged the difficulties the team had to go through to win the ultimate and expressed his pride in their ability to surmount the challenges to dominate and win the continental title.

“I know you are going to achieve a lot and make this country proud,” he said.