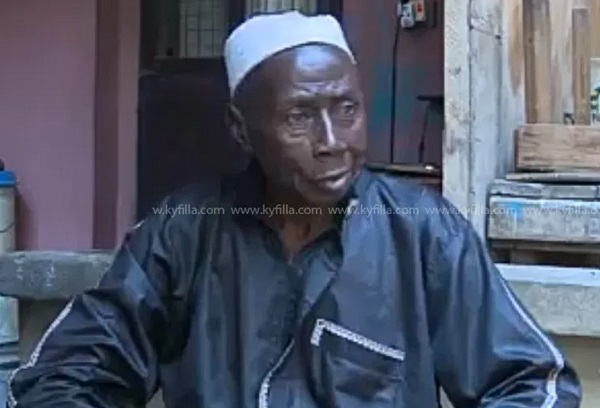 A few weeks ago, I came across Abukari Gariba drenched in sweat, trekking to the Baba Yara Sports Stadium from his Akwatialine-based residence.

Gariba, who is now 77 years old, was on his way to watch a football match involving his former club Kumasi Asante Kotoko at the Baba Yara Sports Stadium in Kumasi

However, he had to trek in the scorching sun, because he had no means of transport, neither had he any money to board one.

Trekking to the Baba Yara Sports Stadium has, therefore, become a routine for him, and whether rain or shine, he finds himself there to join some of his former playmates who are still alive, and have made the sports stadium, named after one of their brilliant playmates- the late Baba Yara- their second home.

For the present generation, who have a faint idea about Abukari Gariba or know next to nothing about him, he was a potent striker whose main appetite in soccer was goal scoring. Nicknamed (Goal ‘Namafife’) which means goal scoring is my focus in football, he featured prominently for the Porcupine Warriors, Kumasi Asante Kotoko, as a young man, and for 12 consecutive years, between 1962 and 1974, he became totally embroiled with Kotoko, scoring important goals at crucial matches before hanging up his boots.

He also featured prominently for the senior national soccer team, the Black Stars, helping to qualify them to two Olympics in 1968 and 1974 at Mexico and Munich respectively, and in that youthful and exuberant period as a potent striker, he was too hot to be handled by opposing defenders.


This was because he had great pace and power in both legs, such that his presence in the vital area of his opponents was a source of constant worry for opposing defenders and goalkeepers.

Playing alongside the late Ohene Brenya, the late Robert Mensah, Malik Jabir, Ibrahim Sunday, Ben Kusi, Sulley Muhammed, Yaw Sam, Atia Muhammed, Osei Kofi, Oliver Acquah, Clifford Odame and Ousman Olando among others, they constituted the core of the 1971 Kotoko squad who won the African cup for the Porcupine Warriors for the first time in far away Zaire, now Democratic Republic of Congo.

It was on that foreign land that Kotoko defied all odds to beat their opponents, Englebert, 2-1 in front of over 30,000 spectators to bring the African cup to Ghana and Kumasi for the first time in the history of the Republic of Ghana.

After a pulsating 1-1 draw at the Kumasi Sports Stadium during the first leg of the finals against Englebert, where Abukari as usual scored the first goal and Kalala equalised for Englebert, the stage was set for the battle royale in Zaire for the grand finale, and in the presence of the late President Mobutu Sese Seko, it was the potency and striking prowess of Abukari and Malik Jabir which manifested to give the trophy to Kotoko.

After Abukari scored the first goal on the 15th minute, as he predicted to silence the vociferous fans, their opponents equalised, and were again awarded a penalty, but Chinadu, who equalised for his side, blasted away that opportunity, and when Malik Jabir got his opportunity, he made no mistake by nodding the ball home to get the match winner for Kotoko, making it possible for them to win the giant trophy at stake.

Others like Messrs P.K. Gyempe, now 79 years, and a former national athlete who was among the first Ghanaians to participate in the All Africa Games in Congo Brazzaville, James Kwakye, who featured prominently for the Black Stars, as well as Joe DeGraft, Damprane, Yaw Sam, Nana Kofi Nyamekye (Great Ashantis), Akwasi Agyemang (Ghana Dadie) Lomotey, Akueteh Armah (Ninety-nine styles), were all former national football stars.

Their contributions to football development in the country were unsurpassed, but they now belong to history. This is because the present generation knows nothing about their exploits so far as artistic football is concerned.

Their generation, especially soccer administrators, politicians and businessmen, who enjoyed their exploits, watching them exhibit their skills on the fields each passing Sunday, and ought to have supported them physically, materially and financially, seems to have totally forgotten about them.

They are suffering not only from old age, but are financially handicapped. This is because during their time, they played the game just for fun and, therefore, earned next to nothing for their future upkeep, and their benefactors also made no provision for them for their future upkeep, so for now, almost all of them have been reduced in dignity and have almost become paupers.

They are spread far and wide across the country, embroiled in worry, totally neglected and languishing in abject poverty, due to the fact that their sacrifices yielded no dividend to adequately support them in their old age and how to cope with the present socio-economic predicament.

They are the forgotten heroes. Almost all of them are not only financially handicapped, but are also bedridden. They have little or no support from friends at this stage of their lives, and the nation which ought to have come to their aid with a regular monthly income has also totally neglected them. Those who are supported by the state are given peanuts, which do not even take them home, let alone meet their needs.

Some of them, such as Joe DeGraft, Akueteh Armah, Nana Kofi Nyamekye, James Kwakye, Kwasi Owusu, Clifford Odame, Dogo Moro and Abukari Gariba, also live in rented homes, where their landlords keep reminding them about rent advances and threats of ejection.

When Graphic Sports caught up with Abukari Gariba, he recounted his glorious days with Kotoko and the Black Stars, where he and other talented players committed themselves to promoting soccer in Ghana, “but we have ended up almost as paupers”.
“At the moment, my rent will expire by the end of this year, and I face imminent ejection. This is because at 77, I cannot earn any revenue to get money for my landlord,” he bemoaned.
Abukari says;, “I come from Tamale, but since my relocation to Kumasi almost 59 years ago, I have lost touch with my family and have now become a Kumasi boy, so I will not know what to do if I am ejected.”

He said other former soccer stars had similar problems, due to the fact that they had no sources of income to live on, “and even when we won the cup for Kotoko, we never got even a pesewa from anybody”.
“We sacrificed everything to bring soccer to this level, but we have nothing to show for our past achievements, not even past administrators of Kotoko recognise us for what we did for the club. Anytime I sit down to ponder over this issue, I become very sad because I would have saved much if I had used my youthful period to even pull trucks,” he bemoaned.

Mrs Regina Nduro, a football enthusiast, believes that it was time the football family came together to organise regular charity matches to raise funds that would support their former heroes.

“Since they are spread across the country and had played for top clubs, they could be easily identified, so Kotoko, Hearts, Olympics, Ashgold and Real Tamale United among other clubs should set some period aside and play charity matches to raise funds to support them. I am saying this because Ghanaians would be eager to pay to watch such matches, and when it becomes an annual affair, something could be raised to help them.”