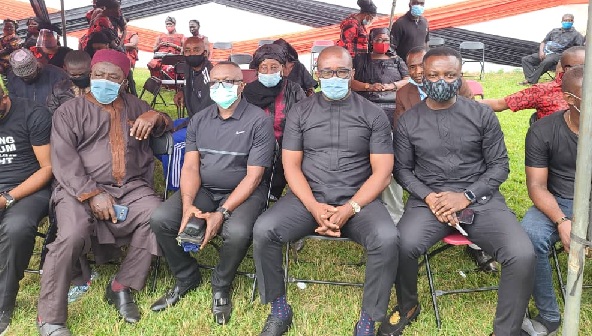 A GFA delegation led by Kurt Okraku were present

A one week observation has been held for one of Black Stars’ all time goal poachers and 1978 AFCON winner, Opoku Afriyie, at Kotei, a suburb of Kumasi.

The observation brought the entire football fraternity together to Kumasi in remembrance of a sporting gem who contributed immensely to the development of the game in Ghana.

Afriyie, fondly referred to as "Bayie", scored twice in the 1978 Africa Cup of Nations final to beat Uganda 2-1 at the Accra Sports Stadium.

He played for Kotoko, joined Hearts of Oak in a dramatic fashion and rejoined his former club after he was renamed "Nii Opoku."

Afriyie won the Ghana Premier League top scorer award from 1978 to 1981.He rose to become the welfare manager of the Black Stars and was a familiar face at the Manhyia Palace.

He passed on Sunday, March 29, 2020, in Kumasi after a short illness. He was 65 and left behind a wife, Mrs Georgina Opoku Afriyie, and seven children.

The one week ceremony held at his residence at Kotei in Kumasi in the Ashanti Region on Saturday, August 8, 2020, brought together many football legends , including past Black Stars players, administrators, coaches.

They included FA president, Kurt Okraku, Ghana's all time top scorer for the Black Stars, Asamoah Gyan, and officials of Kotoko and Hearts.

Coahes and teammates of the late Afriyie, Malik Jabel, Abdul Razak as well as Daniel Ammoh, Frimpong Manso and Prince Poku "Poly," all of Kotoko fame, were all present.

George Kennedy, a former management member of Kumasi Asante Kotoko, said he met the late Opoku Afriyie when he joined Asante Kotoko in 1974 and described him as “a regular player of our time till he retired.”

"Though smallish, his speed and goal scoring abilities was unparalleled,” he added.

Meanwhile, the Confederation of African Football (CAF) has expressed  its condolences to the Ghana Football Association (GFA) and the family of Opoku Afriyie, describing him as legend, and that his demise was a "big blow to the African football fraternity."

“Our thoughts are with you and the bereaved family during this difficult period,” said CAF President, Ahmad Ahmad.

Opoku Afriyie, nicknamed ‘Bayie’, meaning wizard in his native Akan language, was the leading marksman of his boyhood club, Asante Kotoko, during his hey days.

He later cross carpet to eternal rivals, Hearts of Oak, at the twilight of his career, becoming one of the first players to feature for Ghana’s two most successful clubs.

After retirement, he served as Team Manager of Asante Kotoko, and Welfare Officer of the Ghana senior national team, the Black Stars.
The family is yet to announce the date  for the final funeral rites of the late football legend.