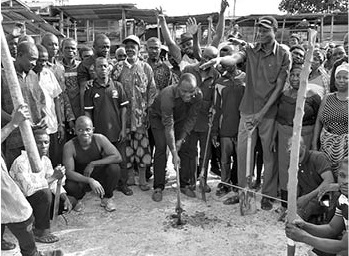 Bismark Tetteh Nyarko (with pickaxe), MP for Upper Manya Krobo Constituency, cutting the sod for work to commence. Looking on are some residents of Sekesua
30.5k Shares

The National Democratic Congress (NDC) Member of Parliament (MP) for the Upper Manya Krobo Constituency, Bismark Tetteh Nyarko, has cut the sod for the commencement of 21 market sheds for gari traders at Sekesua in the Eastern Region.

Sekesua is one of the communities within the Upper Manya Krobo district which processes gari.

Many traders from various towns such as Accra, Ashaiman, Tema, Koforidua and other parts of the country converge on the market on Wednesdays and Saturdays to transact business in gari and other farm produce.

The sod-cutting was followed with communal labour to immediately erect poles for the sheds.

The construction of the market sheds which is estimated to cost GH¢70,000 was in response to an appeal made by the gari sellers and other residents of the community to the MP.

This is because torrential rains used to soak the gari when market was in session, with traders from other parts of the country converging on the place to do business.

The rains, according to the traders, had been destroying the gari making them lose thousands of cedis.

At a short ceremony to officially cut the sod, the MP said his outfit was moved by the plight of the women and decided to respond to their request to construct the sheds to shelter them and the gari being offered for sale.

According to him, apart from the project making it possible for the gari traders to generate income, it would also increase the assembly’s revenue base.

Mr Nyarko said another reason for him coming to the rescue of the gari sellers was that currently, due to the inappropriate place of selling gari at Sekesua, some of the traders used to send the produce to the Agogo Market, some kilometres away.

That, he explained, would prevent the gari sellers from travelling such a long distance to sell their produce.

“The gari traders have suffered for a long time because there are no roofs under which they sell their commodity which can easily be destroyed by rain.”

A gari and fish seller, Osson Janet Korkor, told the Daily Graphic she was happy that the MP had decided to construct the market sheds to save them from rains and the scorching sun.

According to her, the market place had almost been vacated, and that had it not been the gari sellers, there would not be any market for the town.

The Dadematse of Sekesua, John Kumi, who was not happy about the current state of the market, said that compelled them to solicit for assistance from the MP to construct the sheds till the government also constructed the entire market.

Nene Kumi appealed to the MP to consider constructing a fence wall around the market.

He expressed his appreciation to the MP coming in to construct the market sheds for them to feel comfortable.