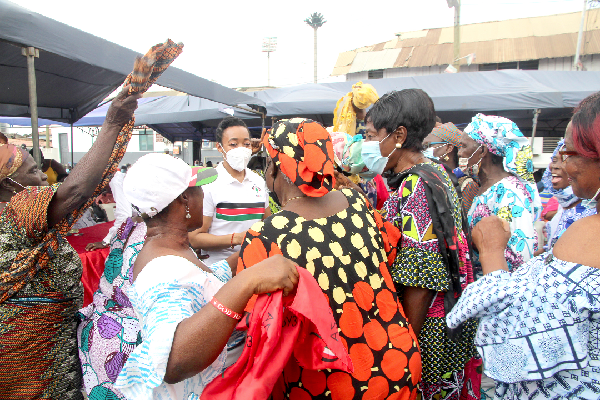 The National Democratic Congress (NDC) Member of Parliament (MP) for Klottey Korle, Dr Zanetor Agyeman-Rawlings, has urged the aged to help shape the mindset of the youth to maintain a peaceful and stable nation.

Nobody, she said, should be allowed to derail the peace of the country because without peace no development could be achieved.

The aged, she said, had a duty to help the youth know where the country was and the struggles it went through to gain independence to enable them to appreciate where the country was now so that the peace and stability of the nation would not be taken for granted “because other neighbouring countries do not have the peace Ghana enjoys and so it must be protected”.

Dr Agyeman-Rawlings said this at a gathering of the aged in her constituency, dubbed “MP’s Time with the Aged,” in Accra last Friday.

The gathering was organised to enable the MP to spend time with the aged in her constituency.

She used the occasion to distribute food items to the over 500 aged people present.

Dr Agyeman-Rawlings said she was celebrating the aged not to score political points but because it was the right thing to do.

“One piece of advice my father gave me was that I should always respect and remember the aged because they are the pillars of our communities and the ones holding the society together,” she said.

She commended the aged for their diverse roles that had contributed to the development of the country, stating that it was now time for the youth to take up the mantle and push the country to an enviable status.

“We have a responsibility to run the rest of the race and pass it on to the next generation”, she added.

The National Organiser of the NDC, Mr Joshua Akamba, said the MP was a daughter to them all and was ready to support the constituency but she would also need the support of the aged to lead the constituency and bring the needed development.

The Chairman for the NDC in the Klottey-Korle Constituency, Mr Benjamin Neequaye, thanked the aged for supporting the MP in her endeavours over the years.

One of the aged at the gathering, Madam Charlote Okai, said she was glad about the initiative of the MP and thanked her for such a gesture towards her constituency. She also pledged their support for her vision for the constituency.