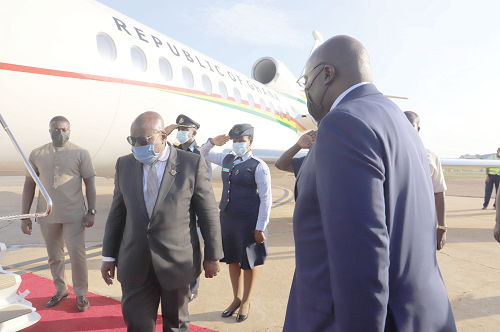 President Akufo-Addo will grace the occasion in his capacity as the Chairman of ECOWAS.

He will return today.

The Vice-President, Dr Mahamudu Bawumia, who saw the President off at the Kotoka International Airport last night, will act in the President’s stead.

On behalf of the Overlord, Naa Bohagu Mahami Abdulai Sheriga, Mba Gumah said President Akufo-Addo’s presence at the funeral made it unique and proved that he had great concern and was committed to Mamprugu and Vice-President Bawumia.

“You were mourning with him at the time he was mourning, and because of that the Nayiri, as custom demands, wants us to come and verify if you arrived safely after coming to mourn with us and to thank you for finding it necessary to mourn with us,” Mba Gumah said, emphasising that the Nayiri was very grateful.

Mba Gumah, on behalf of the Nayiri, also thanked the President for sending a message to him (Nayiri) when he was celebrating the Damba Festival.

Among the Mamprugu delegation were Vice-President Bawumia, some chiefs and elders of Mamprugu and the Member of Parliament (MP) for Walewale, Hajia Lariba Zuweira Abudu.

There were some senior government officials, including the Chief of Staff, Mrs Akosua Frema Osei Opare, with the President at the time of the visit.

President Akufo-Addo said he was honoured by the visit and expressed his appreciation to the Nayiri for sending a delegation to him.

The President was happy that the funeral had been well organised and befitting, for which the Nayiri and all the people of the area were satisfied.

“When somebody does something that you find noteworthy, you thank him/her. We all do it; thanksgiving is sacred and I understand and appreciate the gesture from the Nayiri. My presence at the funeral, for me, was a duty; the woman was a mother to all of us.

“She treated me impeccably a few times. I got to know her in the latter stage of her life but her treatment of me I can have no complaints at all.

“So it is important for me too to express my appreciation for the way she was to me and to her son, with whom I have been working in close contact in the last five years in Ghana,” President Akufo-Addo added.

He said he was happy that the late Hajia Mariama had got the funeral that he described as “a very dignified exit for a noteworthy woman”.

Eulogising her,the President said the late Hajia Mariama married a Ghanaian statesman and produced a Vice-President for the country and so she did her bit.