The Member of Parliament (MP) for Ofoase Ayirebi Constituency in the Eastern Region and Minister of Information, Kojo Oppong Nkrumah, has inaugurated a new steel bridge over the Asikusie River to facilitate the smooth transportation of people and goods in the Akyem Otwereso community.

The bridge comes as a great relief to constituents who previously had to use longer and winding alternative routes through Ayirebi to reach their various destinations.

The Asikusie bridge constructed decades ago was made of wood and was smaller with a lot of its bolts coming off.

Inaugurating the bridge at a brief ceremony last Friday,

Mr Nkrumah expressed his delight and said the rehabilitated bridge would help reduce travel time and cost for his constituents. 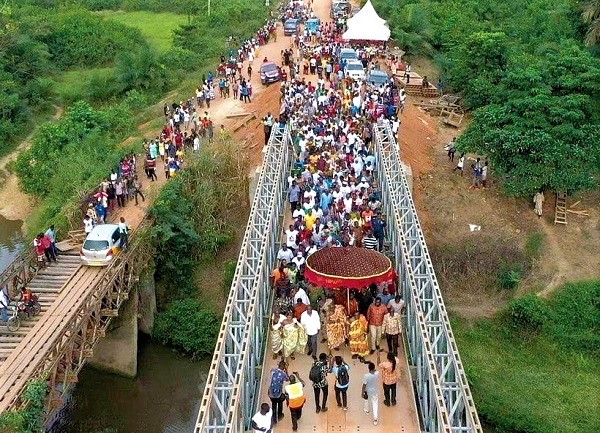 The wooden bridge, which was on the brink of collapse, posed threats to users. This prompted the MP to intervene in its rehabilitation as part of a comprehensive programme to improve roads and bridges in the constituency.

Residents of the area expressed appreciation for the rehabilitation of the steel bridge and thanked the MP for always putting the needs of his constituents first.