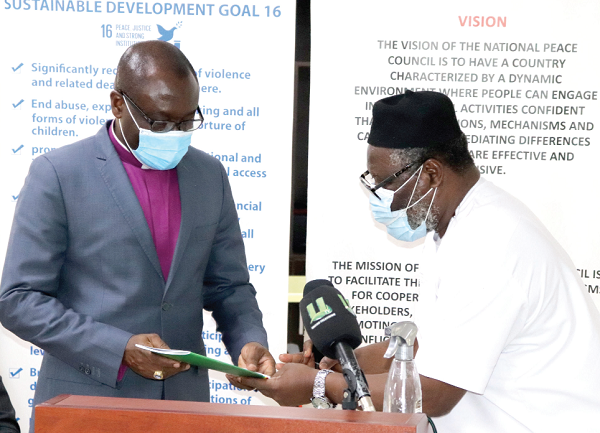 The National Peace Council (NPC) has said tackling polarisation of the country in a post-election petition at the Supreme Court will be its priority.

According to the council, political polarisation was a major issue that had the potential to bring about a crisis, hence the need to pay particular attention to it.

“I think that the threat of polarisation must be dealt with after the election petition because there is the need for us to unite and forge ahead as a nation for development,” the Chairman of the NPC, Rev. Dr Ernest Adu-Gyamfi, said at the handover ceremony of the council in Accra last Thursday.

The event climaxed a three-day orientation of the new Governing Board of the NPC which was inaugurated in November last year.

There were also discussions of pertinent issues of peace and security in the country.

Handover notes of the previous board were presented to Rev. Dr Adu-Gyamfi.

The chairman gave an assurance that the council would work closely with partners to ensure sustainable peace in the country.

“We have to explore more closely areas we can partner to strengthen our collective abilities to achieve greater efficiency and effectiveness,” he said.

Rev. Dr Adu-Gyamfi said although the country was an oasis of peace in the sub-region, it was still confronted with issues such as election-related violence, political polarisation, protracted land and chieftaincy conflicts, communal violence, insurgency, threat of terrorism and extremism, and secession attempts, hence the need to work together to solve those challenges within the next 10 years.

“We have to work together, for there is always strength in partnerships and unity. Our doors are open and we will continue to engage with you to sustain the peace of the country,” he added.

On the election petition, Rev. Dr Adu-Gyamfi further appealed to the public to accept the verdict of the court.

“All parties said they have made a case but justice is in the bosom of the judges and once the case is determined we want to appeal to Ghanaians to accept the verdict so that business can move on smoothly.”

“Whoever the judgement goes in favour of or against we need to understand that it is the path we have chosen, the path of democracy and so let us move on regardless of the outcome,” he said.

A former member of the NPC, Rev. Dr Nii Amoo Darko, entreated the new members to serve diligently to realise their objective.

He also urged them to learn from the lessons, challenges and recommendations of the old board to guide them in their duty.

“I urge you to chart a new path to position the NPC as a strong peace architecture both in the country and at the global front,” Rev. Dr Darko added.