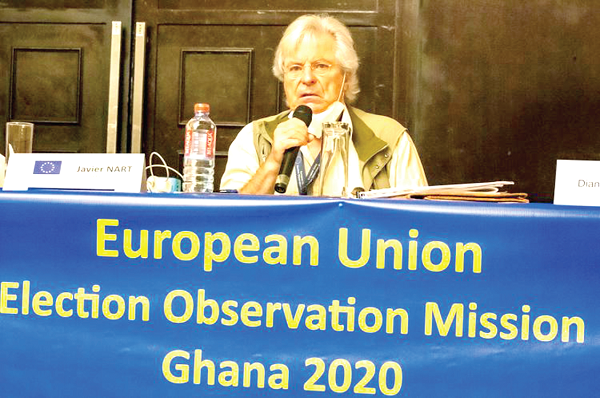 Ghana has been asked to make a law on campaign expenditure and finance to enhance the overall transparency and accountability of political finance, the European Union (EU) Election Observation Mission to Ghana (EU EOM) has suggested.

It said the law should establish disclosure requirements of incomes and expenses for parties and candidates and limits on expenditure and donations, including for in-kind donations.

The Chief Observer of the EU EOM, Mr Javier Nart, made the call when the team presented its observations and recommendation on Ghana’s 2020 Presidential and Parliamentary Elections at a press conference.

The Mission returned to Ghana to present its final report on its observation of the elections and to discuss with stakeholders the proposed reforms contained in it.

It said such a legislation established effective oversight, sanctions and enforcement mechanisms that included a timely publication of all campaign finance reports, including online.

The EU EOM also asked Ghana to introduce an effective sanctioning mechanism against the misuse of state resources, including administrative and security apparatus, during the election period.

It also asked government to provide the National Media Commission (NMC) with sufficient resources to conduct media monitoring and properly oversee the work of the media.

Mr Nart further called for improved procedures for counting and collation and for the publication of detailed results.

He stated that the recommendations were proposals for consideration by Ghanaians, adding that they aimed at improving future electoral processes and strengthening Ghana’s democracy.

He said the return visit was the EU EOM’s final activity and explained that afterwards the EU Delegation was going to support Ghanaian authorities and civil society in efforts to implement the recommendations.

The team’s mandate was to assess the electoral process against international obligations and commitments for democratic elections as well as the laws of Ghana.