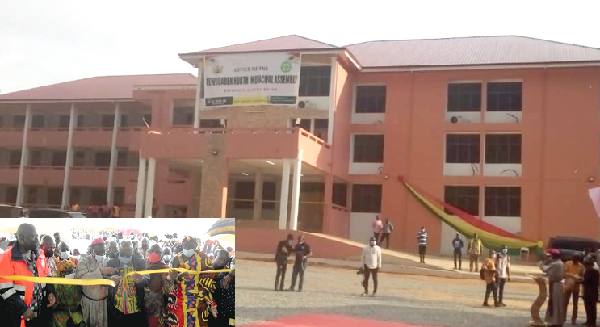 The New Juaben North Municipal Assembly at Koforidua in the Eastern Region has a new address following the inauguration of its new office complex.

Last Tuesday, President Nana Addo Dankwa Akufo-Addo inaugurated a newly constructed multipurpose three-storey office complex for the assembly at Koforidua Effiduase as he began his tour of the Eastern Region.

The facility, according to the President, was to help address the office accommodation challenge facing the municipality when it was carved out of the New Juaben Municipality in 2017 as it was currently conducting government business at the Effiduase Community Centre.

The facility, which cost GH¢3,442,539.45 million was put up by the Government of Ghana through the District Assemblies Common Fund (DACF).

The new building, which consists of 37 new offices, a 150-capacity conference hall, a urinal and places of convenience among others, was meant to promote the day-to-day business of the New Juaben North Municipal Assembly.

At a short ceremony to inaugurate the facility, President Akufo-Addo indicated that the government was concerned about the welfare of the Metropolitan, Municipal and District Assemblies (MMDAs) and that they needed to have decent working environment to improve productivity.

According to him, the government was committed to providing the needed infrastructural needs of the assemblies, especially administration blocks for the newly created ones.

The Effiduasehene and Nifahene of the New Juaben Traditional Area, Nana Okoawia Dwomo Baadu II, commended the President for the massive developmental projects being executed within his four and half years in office.

In a related development, President Akufo-Addo also inaugurated the Okere District Assembly Hall Complex at Okere, a newly created district, to enhance administration in the area.