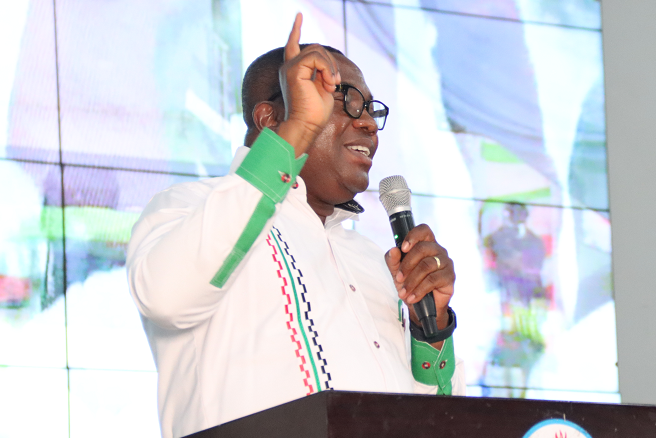 The National Democratic Congress (NDC) is putting its act together to win the 2024 elections.

According to the party, it was focused on taking up the mantle of leadership to restore hope for the country.

“We are focused on re-equipping, re-tooling and re-positioning our party to prepare ourselves to win the next election to form the next government," the National Chairman of the NDC, Samuel Ofosu Ampofo, said at the 30th anniversary celebration of the party in Accra last Friday.

The event was attended by leading members and other party faithful.

They included a former Chief of Staff, Nana Ato Dadzie; the Chairman of the Council of Elders, Alhaji Mahama Iddrisu; the running mate of the party’s presidential candidate in the 2020 elections, Prof. Jane Naana Opoku-Agyemang; the General Secretary, Johnson Asiedu Nketiah; the Minority Leader in Parliament, Haruna Iddrisu, and a former Minister of Finance, Dr Kwabena Duffuor.

Touting the achievements of the party, the national chairman said the NDC had contributed to the development of the country more than any political party in the Fourth Republic.

He said in the health, economic, educational, energy and water sectors, the party’s delivery while in government was unmatched.

"We have performed better during our tenure in office than our opponents, who have used propaganda to throw dust into the eyes of the people. Therefore, we have every reason to celebrate the party's 30 years. We have a better record than others," he said.

Setting the stage for the celebration, Mr Ofosu Ampofo said the NDC was a great party,and that it was incumbent on all members to commit themselves to its policies and programmes.

Listing some of the success stories, he said it was the NDC that introduced and implemented the National Electrification Programme to connect many of the regions, including the then Brong Ahafo and Northern Ghana, to the national grid.

The NDC Chairman said it was the NDC in government that changed the power generation mix and brought in the Aboadze Thermal Plant.

In the health sector, Mr Ofosu Ampofo said it was the NDC that started the construction of regional hospitals.

In the area of education, he said it was the NDC that established all the 10 polytechnics and then upgraded them into technical universities.

He also mentioned the provision of water through the small water supply system and community water and sanitation as some of the works that were done by the party.

Mr Ofosu-Ampofo said the party had delivered according to its motto of unity, stability and development and had brought about same and unprecedented development in the country.

Mr Iddrisu gave assurance of the determination of the Minority in Parliament, with the grass roots and all other structures of the party, to rescue the country from the non-performing New Patriotic Party (NPP) government.

"To the Ghanaian people and the NPP, I can say without any fear of condemnation that there is no political party as successful as the NDC. I say without fear of contradiction that there is no political party that has contributed to the economic, social and democratic transformation of the country more than the NDC," he stressed.

According to him, the party had contributed immensely to Ghana becoming a beacon of hope for democracy in Africa, and that the country owed it to former President Rawlings and the NDC for a liberalised economy that allowed for private participation in the economic management of Ghana and not the NPP.