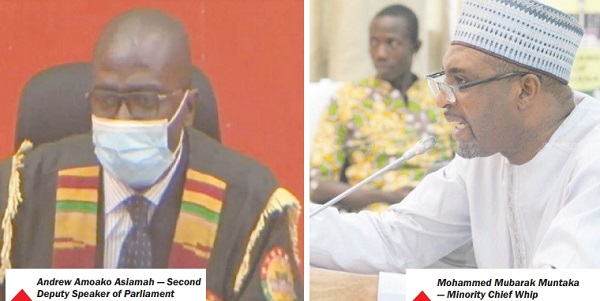 The delay in the presentation of the report on the Lesbian, Gay, Bisexual, Transgender, Queer and Intersex (LGBTQI) bill to the plenary by the Committee on Constitutional, Legal and Parliamentary Affairs and the appearance of the Finance Minister took centre stage on the floor during its sitting this week.

The delay in the releases of statutory funds such as the District Assemblies Common Fund (DACF) to enable Members of Parliament (MP) to have their share to undertake development projects in their respective constituencies also came up strongly on the floor of the House.

The issue on the delay of the report by the Constitutional, Legal and Parliamentary Affairs Committee on LBGTQI +bill was raised by the National Democratic Congress (NDC) Member of Parliament (MP) for Ho West, Emmanuel Kwasi Bedzrah, after the Business Statement of the House was presented for the week by the Deputy Majority Leader and New Patriotic Party (NPP) MP for Effutu, Alexander Afenyo-Markin.

Mr Bedzrah, who is one of the Minority MPs sponsoring the bill to criminalise activities of LBGTQI, raised the concerns about the delay by the committee in presenting the report to the plenary for consideration.

The Minority Chief Whip, Mohammed Mubarak Muntaka, who is the NDC MP for Asawase, laid the blame on the chairman of the Committee, Kwame Ayimadu-Asante, NPP MP for Asante Akyem Central, for deliberately delaying the work of the committee.

The Deputy Majority leader, Mr Afenyo- Markin, responded to Mr Muntaka’s comments by saying the Minority were just being mischievous, political and partisan since there was no objectivity and fairness in the submission.

He wondered why the Minority would blame the chairman of the committee for the delay in submitting its report and leave out the ranking member, Bernard Ahiafor, who is a member of the NDC.

The issue of the delay in releasing statutory funds, especially the DACF for MPs to undertake their constituency development projects also came up strongly on the floor with the Deputy Minority Chief Whip and NDC MP for Banda, Ahmed Ibrahim, leading the charge.

But the Majority Chief Whip, Frank Annoh-Dompreh, MP for Nsawam-Adoagyiri, announced that the government had released GH¢300 million of the GH¢2 billion arrears owed the DACF.

The Minority also took exception to the non-appearance of the Finance Minister, Ken Ofori-Atta, to answer questions asked by MPs relating to his ministry.

However, in presenting the Business Statement for next week’s sitting, beginning from Tuesday, June 14 and ending Friday, June 17, 2022, on Thursday, June 9, 2022, Mr Afenyo Markin announced that the Finance Minister was scheduled to attend to the House to answer 16 questions asked by members relating to his ministry on Thursday, June 16, 2022.

During the sitting four Ministers of State were in the House to respond to questions asked by members relating to their ministry.

The House did not sit yesterday, June 10, to enable MPs to lead their constituents to plant tree seedlings to commemorate this year’s Green Ghana Day, a national campaign aimed at restoring the lost vegetative cover of the country and to combat climate change.

The Second Deputy Speaker of Parliament, Andrew Amoako Asiamah, Independent MP for Fomena, presided over sittings for the week in the absence of the Speaker, Alban Sumana Kingsford Bagbin, who had been in Sierra Leone for the Commonwealth Parliamentary Association (CPA) conference.