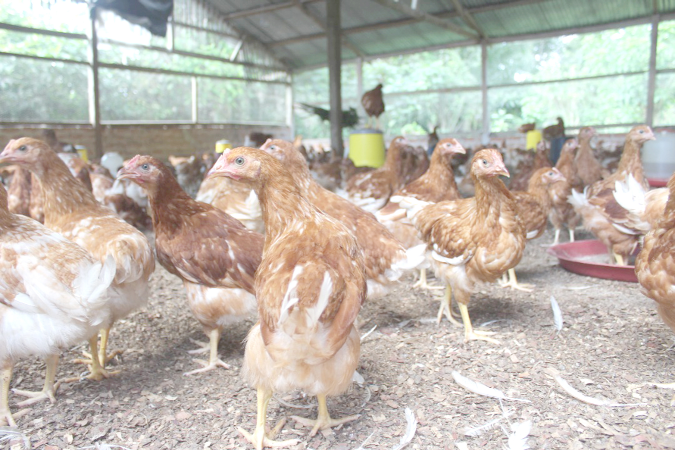 A poultry farm at Wamfie, capital of the Dormaa East District
30.5k Shares

Dormaa East constituency in the Bono Region has witnessed massive infrastructure projects and there are other uncompleted projects scattered across the communities.

Without any doubt, therefore, Dormaa East is one of the fastest developing and vibrant constituencies in the Bono Region.

Over the past six years, the constituency has witnessed tremendous development, especially in the area of infrastructure.

Some of these projects have been completed and are in use while others are at various stages of completion.

It was, therefore, not surprising that a Deputy Minister of Local Government, Decentralisation and Rural Development, Augustine Collins Ntim, commended the Dormaa East District Assembly for investing heavily in the development of the constituency during his recent performance assessment visit to the area.

The constituency has a land size of 556.7 kilometre square, which is about 1.18 per cent of the total land area of the Bono Region.

It shares common boundaries with Dormaa Central to the west, Berekum East to the north, Sunyani West to the east, and to the south by Asunafo North and Asutifi North.

The ruling New Patriotic Party (NPP) has dominated the politics of the Dormaa East Constituency since its creation in 2007, winning all four elections.

In the 2008 general election, the NPP candidate, Yaw Ntow Ababio, won the seat with 11, 363 representing 59.22 per cent votes as against 6,485 votes representing 33.80 per cent by the National Democratic Congress (NDC) candidate, Isaac Kofi Kyeremeh.

The pattern in the 2012 general election was not different as the NPP parliamentary candidate, William Kwasi Sabi, won the seat with 13,712 votes (56.85 per cent) while the NDC candidate, Ali Adjei Ibrahim, garnered 9,907 representing 41.07 per cent votes.

Even though the NPP changed its candidate in 2020, the new candidate of the NDC, Rachel Owusuah, could not change the status quo as she had 11,383 votes representing 40.6 per cent and lost to Paul Apreku Twum-Barimah who had 16,679 representing 59.4 votes.

The constituency has a mix of formal and informal workers such as health workers, teachers, civil and public servants, security personnel, agriculture officers, farmers and traders.

It has a large pool of labour force, constituting more than 70 per cent of the sampled population.

Its population is generally youthful with agriculture as the main activity in the constituency.

The poultry industry is one of the largest economic activities in the district and egg production is done on a large scale with over 60 medium-to-large scale poultry farms.

That is why the constituency has been selected for the establishment of a poultry processing plant at Nseseresu and an egg tray factory at Dormaa Akwamu under the government's One-District-One-Factory (1D1F) programme.

Currently, works on the two projects are about 70 per cent complete.

The constituency has suitable soil for the production of a variety of crops in commercial quantities.

The constituency, with a farmer population of 33, 000, is benefiting from the Planting for Food and Jobs (PFJs), Planting for Export and Rural Development (PERD) and Agriculture Mechanisation, among other agricultural policies.

The constituency hosts one of the biggest educational institutions, the Okuafo Pa Agriculture-Business Training Centre, which seeks to provide theoretical and practical training to students in agri-business.

It is an initiative of Eni’s Africa Programme aimed at supporting economic diversification in the agricultural sector through skills transfer and business support, particularly by means of self-sustaining agricultural consortia.

The long-term vision of Okuafo Pa is to create an agro-industrial hub that will aggregate and develop self-sustainable agricultural cooperatives to contribute to the socio-economic development of the Bono Region and beyond.

The constituency also hosts the St Ambrose College of Education at Dormaa Akwamu, near Wamfie.

Various educational institutions such as basic, junior high and senior high schools, including the St Ambrose College of Education, has received infrastructure development.

In addition, the constituency has benefited from the various government pro-poor policies and programmes or social interventions.

These interventions include support to Persons with Disabilities (PWDs), the School Feeding Programme with a total enrolment of 13,076 pupils in 32 schools, and the Livelihood Empowerment Against Poverty (LEAP) programme benefiting 302 people.

A number of road projects such as the reshaping of 25 kilometres (km) Wamfie village roads, and the Wamanafo - Praprabebida road have been completed, while the upgrading of the 36.5 km Wamfie Adiemmra-Yawsae road is ongoing at the cost of GH¢37 million.

Processes for the construction of some major towns such as Wamfie, Wamanafo, Dormaa Akwamu, Kobedi and Supra town roads totalling 7km are ongoing.

In all, 3,523 metres of drainage systems have been completed. They comprise 222 metres for Wamanafo–Begyewe, 159m for Wamfie Habitat, 529m for the assembly office/hospital, 777m at Nserseresu, 1337m at Asuhyiae, 207m at Wamanafo/ BACCSOD and 292m at Wamanafo Newtown drainage systems.

There have also been improvement of extension of electricity in some communities.

From 2017 to 2022, 40 communities have benefited from electricity extension.

The Abakomahene of the Asuotiano Traditional Council, Nana Kofi Adomah, told the Daily Graphic that although the constituency had witnessed massive infrastructure projects, there were other uncompleted projects scattered across the communities.

He mentioned the Asuotiano Community-Based Health Planning Services (CHPS) compound, the Asuotiano Market and some other facilities as some of the projects that had been abandoned for more than four years.

Nana Adomah, who was unhappy about the abandoned projects, appealed to the government to complete them rather than cutting sods to begin new ones.

The Assemblyman of the Wamfie West Electoral Area, Albert Oteng, commended the government for investing in the development of the constituency.

However, he said the lack of streetlights and extension of electricity to some communities were major challenges facing people in the constituency.

Mr Oteng called on the Dormaa East District Assembly to install streetlights and extend electricity coverage to improve visibility at night and reduce criminal activities to boost trading at night.

He explained that thieves and other criminals had taken advantage of the situation to commit crime in the night.

Mr Oteng also expressed concern about the assembly’s inability to construct the Wamfie town and other town roads to facilitate movement.

A 33-year-old resident of Dormaa Akwamu, George Owusu, said so far he was satisfied with the level of development in the constituency.

“There is an improvement in the area of infrastructural development in the constituency as compared to the previous years," he said. 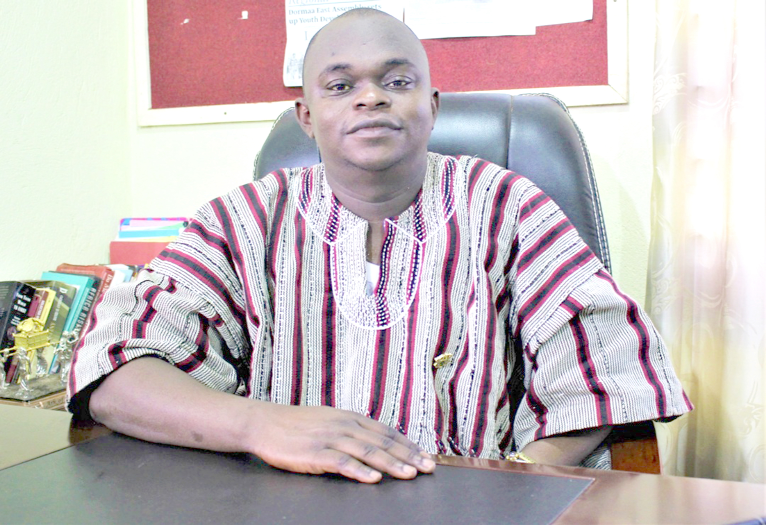 For the Dormaa East District Chief Executive (DCE), Emmanuel Kofi Agyeman, the assembly had performed well due to strong leadership and commitment of the chiefs and people in the constituency.

He, however, stated that there were some challenges the constituency was battling with.

Mr Agyeman said the management of sanitation was a major problem in some major communities, explaining that the assembly had identified about 13 refuse dumps which needed to be cleared and relocated.

Other challenges, he mentioned, were the inadequate drainage systems across the constituency and extension of electricity.

Mr Agyeman explained that the area needed about 3,500 electricity poles to enable it to extend power to some communities.

He added that another challenge was illegal mining popularly known as galamsey, with the perpetrators destroying water bodies and farmlands in some part of the constituency.

He gave an assurance that an anti-galamsey task force was working hard to end illegal mining activities in the area. 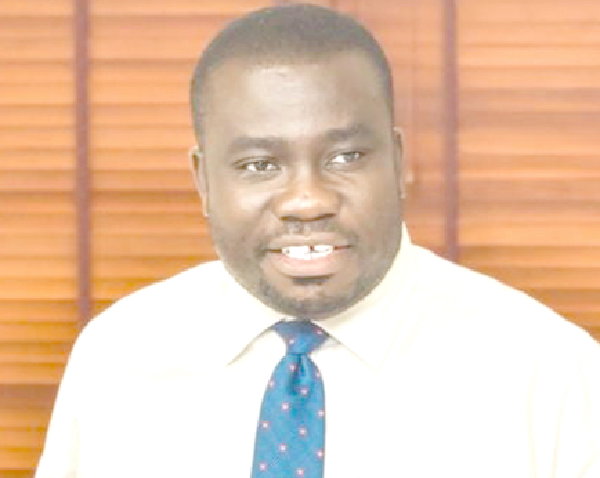 The MP for Dormaa East, Paul Apraku Twum-Barimah, told the Daily Graphic that he had invested his share of the MP's Common Fund and other resources to support the development of the constituency.

He mentioned projects he had undertaken to include the construction of educational and health facilities, particularly, the Wamfie Polyclinic.

Others are support to market women to boost their businesses and supply of water to some remote communities.

"The constituency has also adopted a self-help initiative to complement the central government's efforts in the development of the constituency," he said.

Mr Twum-Barimah said he was lobbying for investors to develop untapped tourist sites in the constituency to provide jobs for the people.