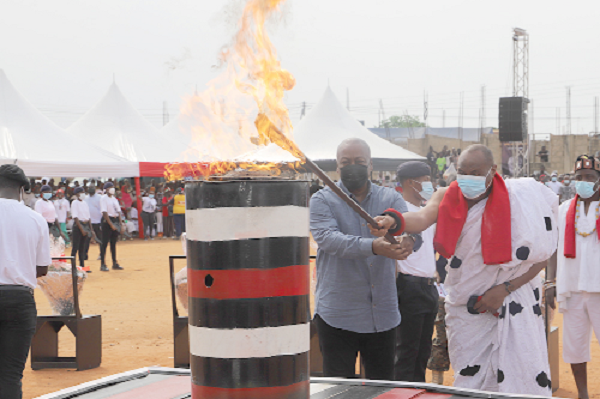 Former President John Dramani Mahama has urged President Nana Addo Dankwa Akufo-Addo to accept responsibility over what he described as the poor governance in the country.

Speaking at the 40th anniversary of the 31st December coup d’tat, he accused President Akufo-Addo of shifting blame to others for the myriad of problems bedeviling the country.

According to former President Mahama, as President, he inherited a power crisis which he attributed to lack of investment over many years in power generation, but he did not put the blame on his predecessors.

“I did not say that it is not my fault. I went to Parliament and said I take responsibility for it and that we will fix, and indeed we fixed it.

“Today, somebody is saying I inherited a weak economy. Five years on, you cannot take responsibility and it is still about Mahama and the NDC. If you cannot do the job, just give way and let the NDC come and do it for you,” he added.

The 31st December, 1981 coup detat, which was led by former President Jerry John Rawlings, led to the formation of the Provisional National Defence Council (PNDC), a military junta that ruled the country for about 11 years and later metamorphosed into the National Democratic Congress (NDC) when Ghana returned to democracy in 1993.

The 40th anniversary celebrations attracted top personalities of the NDC such as former President Mahama and his running mate in the 2020 general election, Professor Naana Jane Opoku-Agyemang, the National Chairman of the NDC, Mr Samuel Ofosu Ampofo, the General Secretary of the party, Mr Johnson Asiedu Nketia, and the NDC MP for Klottey Korle, Dr Zanetor Agyeman–Rawlings.

Former President Mahama said the 31st December, 1981 coup d’etat gave birth to the Fourth Republic and also laid the foundation for a society that ascribed to the principles of probity and accountability.

According to her, as a revolution, the 31st December, 1981 coup was meant to guide the country to build a better, just, inclusive and more prosperous society, but the exact opposite was what was currently happening in the country.

“People do not know the level of suffering of the people and they speak as if all is well. Corruption is now part of our national fabric. Not only is it scary but it is annoying,” she said.

Mr Ampofo said the current situation in Parliament where the NDC and the ruling New Patriotic Party (NPP) had the same number of seats was a testament that Ghanaians were not happy with the governance style of President Akufo-Addo.

He said the country would have been worse off if the NPP had overwhelming majority in Parliament.

For his part, Mr Asiedu Nketia said the current happenings in Parliament was the fault of the NPP and accused the NPP of seeking to circumvent the will of Ghanaians who had voted for a hung Parliament.

“The NPP want to win in Parliament but they do not have the numbers to win. Meanwhile, they are not modest enough to talk to NDC MPs,” he said.