Youth advised to engage in agriculture 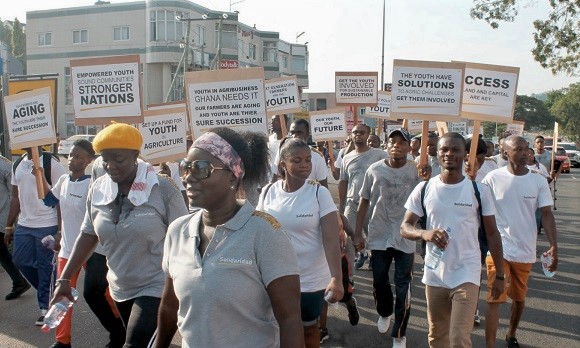 Some staff of Solidaridad, their family and friends displaying placards during the “Sustainability Walk” to support the youth to transform agriculture in Ghana.

Solidaridad West Africa, a non-profit organisation committed to creating sustainable business livelihoods, has embarked on a health walk aimed at promoting agriculture among the youth in the country.

The walk, which took place last Friday in Accra, was also held to commemorate the company’s 50th anniversary, as well as promote healthy living among its staff.

The walk began at about 7 a.m. with staff of the company and their families turning up in great numbers.

They walked through some major streets in Accra amid singing and dancing.

The Regional Director for Solidaridad West Africa, Mr Isaac Gyamfi, said agriculture was the backbone of many African economies and that over half of the population in Africa was employed in the agriculture sector.

He said a major challenge confronting the agriculture sector in recent years was the neglect of the area by the youth, many of whom shied away because of the perception that it was difficult to earn a living from it.

“About 60 per cent of Africa’s population is below the age of 30 and so we have to make the profession attractive in order to absorb most of their numbers into farming. That is the way to go if we want to develop the continent,” Mr Gyamfi said.

He said further that there was a need to show up the business angle of agricultural production systems by way of introducing improved technologies and how easy it was to access such technologies.

He said when that was done, it would make the youth see agriculture as something that was easy and fast to produce.

Mr Gyamfi mentioned that there was need to also address the financial accessibility in the sector, indicating that farming demanded a lot of financial investment and farmers had difficulty in coming by finance to start their farms.

He suggested, therefore, that provision be made that would allow farmers to receive loans with long-term payment.

“That said, securing land for farming and the fear of being confronted with being hit with law suits was another difficulty that had led many people to lose interest in the activity.

He said there was the need for systems that ensured that some lands were reserved for agricultural purposes.

Moreover, he said, farmers ought to be assisted to secure their lands with proper legal documents and when that was done, farmers would feel safe.

“When all that has been enumerated are provided, they will help boost the sector and attract the youth while several opportunities will also be created that would help the country to generate a lot of money from agriculture,” Mr Gyamfi added.