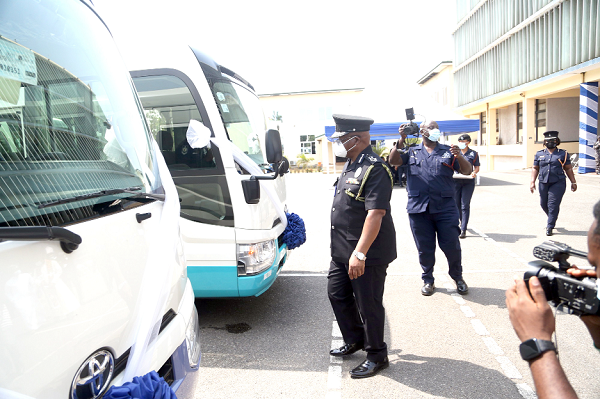 The Ghana Police Service has reviewed internal structures that deal with stress and mental health among its personnel in order to contain possible effects of the conditions.

This follows two suspected cases of suicide among staff, and the Inspector General of Police (IGP), Mr James Oppong-Boanuh, said training in mental health had been mainstreamed into all levels of police training.

He said the police administration was in discussion with the Ghana Psychological Association to incorporate a mental health system into the health and welfare support scheme of the Police Service to take care of personnel and their immediate families.

The IGP made this known at a ceremony to hand over 18 Toyota Coaster buses to the police headquarters and the various regional police commands at the Police Headquarters in Accra.

The 32-seater buses were handed over to the 17 regional police commands and the headquarters to serve personnel.

The IGP charged the commanders to make efficient use of the buses to the benefit of the personnel, indicating that concrete monitoring measures had been put in place to ensure that the buses were used for their intended purposes.

"The buses must be used according to the standard operating procedures that have been developed for their uses," he emphasised.

The IGP said the police administration had engaged professionally trained psychologists who attend to personnel as and when the need arose.

He said personnel were also referred to clinical psychologists and psychiatrists at the police hospital and other accredited health facilities.

He added that these efforts were complemented by counselling sessions by officers of the Religious Affairs Directorate as additional modules of mental health interventions of the Police Service, and noted that the counselling unit of the service would be strengthened to meet the needs of personnel.

He added that commanders at every level of policing should offer opportunities to their staff to speak to their superiors about work and family challenges.

"Where officers find it difficult to approach their commanders, they can speak to members of the Police Management Board, or the IGP or write to the IGP under seal, and commanders are obliged by standard operating procedures to forward such messages," Mr Oppong-Boanuh noted.

The IGP said the police administration had made significant strides in the welfare front of the service and commended members of the police welfare scheme steering committee for the improvement in the welfare of personnel.

Such strides, he said, included the ongoing construction of a 50-bed Police Hospital to cater for the needs of personnel in the middle and northern sectors of the country, while the police welfare scheme's loan threshold has been increased from GH¢12,000 to GH¢30,000, with an application process accessible via mobile phone.