EPA honours promise to 2020 Environmental Journalist of the Year 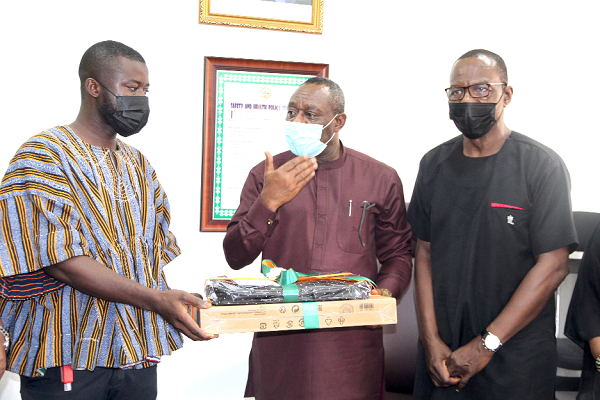 The Environmental Protection Agency (EPA) has presented a laptop, its accessories and a cash prize to Mr Mohammed Fugu, the Ghana Journalists Association's (GJA) 2020 Best Journalist in Environmental Reporting.

The presentation to Mr Fugu, who is the Daily Graphic’s Northern Regional correspondent, is in fulfillment of a three-year pact signed between the EPA and GJA seeking to train and encourage journalists to report on environmental issues to promote sustainable national development and well-being of the people in a healthy environment.

The EPA also donated an undisclosed amount of money to the GJA.

At a brief ceremony in Accra to hand over the laptop and accessories to Mr Fugu, the Executive Director of the EPA, Mr Henry Kokofu, explained that the gesture underscored the cordial relationship between the EPA and GJA.

“The EPA has been consistent in its commitment to support the GJA and to safeguard the environment through advocacy,” he said.

He stated that although the EPA was at the fore front in efforts to protect the environment, reporting on environmental issues was a shared responsibility without boundaries.

Mr Kokofu said the role of the media in environmental protection was key to the country meeting its needs.

“In our modus operandi, education and awareness creation are crucially important and the media fits in perfectly on our behalf,” he said.

While commending Mr Fugu for winning the award, Mr Kokofu urged journalists to report more on environmental issues adding that “the work may be hard, but do it from the bottom of your heart.”

He said the EPA would launch a campaign on maintaining neem trees this year and would, as such, send a proposal to the government calling for a ban to be place on cutting down neem trees.

Mr Kokofu has, therefore, urged the media to lend support to the campaign.

Mr Fugu gave an account of the experience that led him to write the story that won him the award.

He said he observed in 2018 that Shea trees, which were trees of ecological importance in the Savannah Ecological Zone,  were being cut down for charcoal and firewood.

He said he consequently spent three months touring the region and came up with the story.

“Reporting on environmental issues is something that I am passionate about because growing up we had a green environment that is no longer in existence and this is affecting the people negatively. I wrote the story because of the passion I have for the environment and my job,” he said.

He expressed his appreciation to both the EPA and the GJA for the honour done him.

For his part, the President of the GJA, Mr Affail Monney, urged Mr Fugu to remain dedicated to his passion and continue to roll out quality writing.

“It pays to do quality work and show precision and competence in whatever you. I believe this award will spur you on to do more,” he said.