Upper East: Authorities say viral picture of thief handing himself to police did not happen 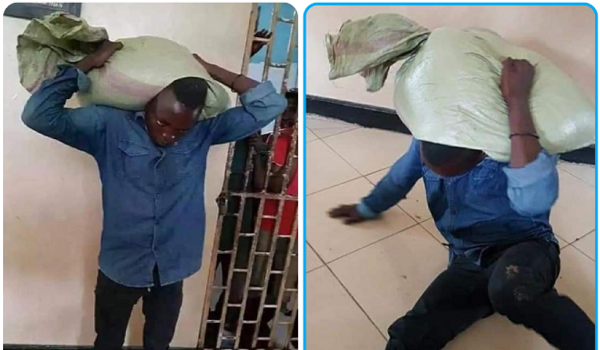 Upper East: Authorities deny viral picture of thief handing himself over to the police

A viral picture of a thief at Binduri in the Upper East Region who is said to have handed himself over to the police after a bag of maize he stole refused to come down from his head is causing a lot of amusement among some residents in the Region.

However, police sources and local authorities in the Binduri district suggest that the incident did not happen in the Region.

When contacted, the Public Affairs Officer of the Upper East Regional Police Command, Assistant Superintendent of Police (ASP) David  Fianko-Okyere told Graphic Online that his checks so far did not reveal that the incident took place in the Region.

The Binduri District Chief Executive, Mr Ayinga Abagre Yakubu on his part said he has followed up on the issue but nothing suggested that it happened in the district.

He however explained that when an individual in the area who claimed he posted the picture on the WhatsApp platform was questioned he said he also copied it from another platform.

Mr Yakubu further indicated that when he made further enquiries it turned out that the incident happened somewhere in Zimbabwe and not in Binduri as the viral picture sought to portray.