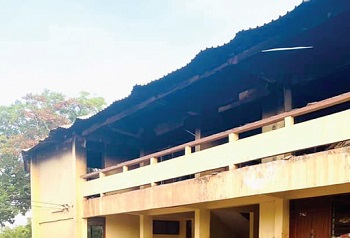 A section of the dormitory destroyed by the fire Follow @Graphicgh

The Tolon Senior High School in the Northern Region has been temporarily closed down by authorities following a fire outbreak which destroyed the girls’ dormitory last Thursday.

The fire, which started at about 9:00 a.m., destroyed the entire top floor of the girls’ dormitory occupied by over 600 students.
Items destroyed included uniforms, chop boxes, mattresses, and books, among other learning materials, belonging to the students.

It took the timely intervention of personnel of the Ghana Fire Service to control the inferno from spreading to other parts of the school building.

The Headmaster of the school, Mohammed Yussif, in an interview, said the decision to temporarily close down the school was reached, in consultation with the Regional Education Directorate and relevant stakeholders.

This is to allow the students to go home for a week while school authorities make alternative arrangements to accommodate them.

He explained that the dormitory that accommodated the girls had been completely destroyed by the fire, for which reason authorities needed some time to make alternative arrangements to temporarily house the students.

The Northern Regional Public Relations Officer of the Ghana Fire Service, ADOII Hudu Baba, indicated that preliminary investigations revealed that there was an electric heater plugged by one of the students, which could have caused the fire.

He said authorities of the school had been advised to get experts to assess the integrity of the block before they considered refurbishing it.