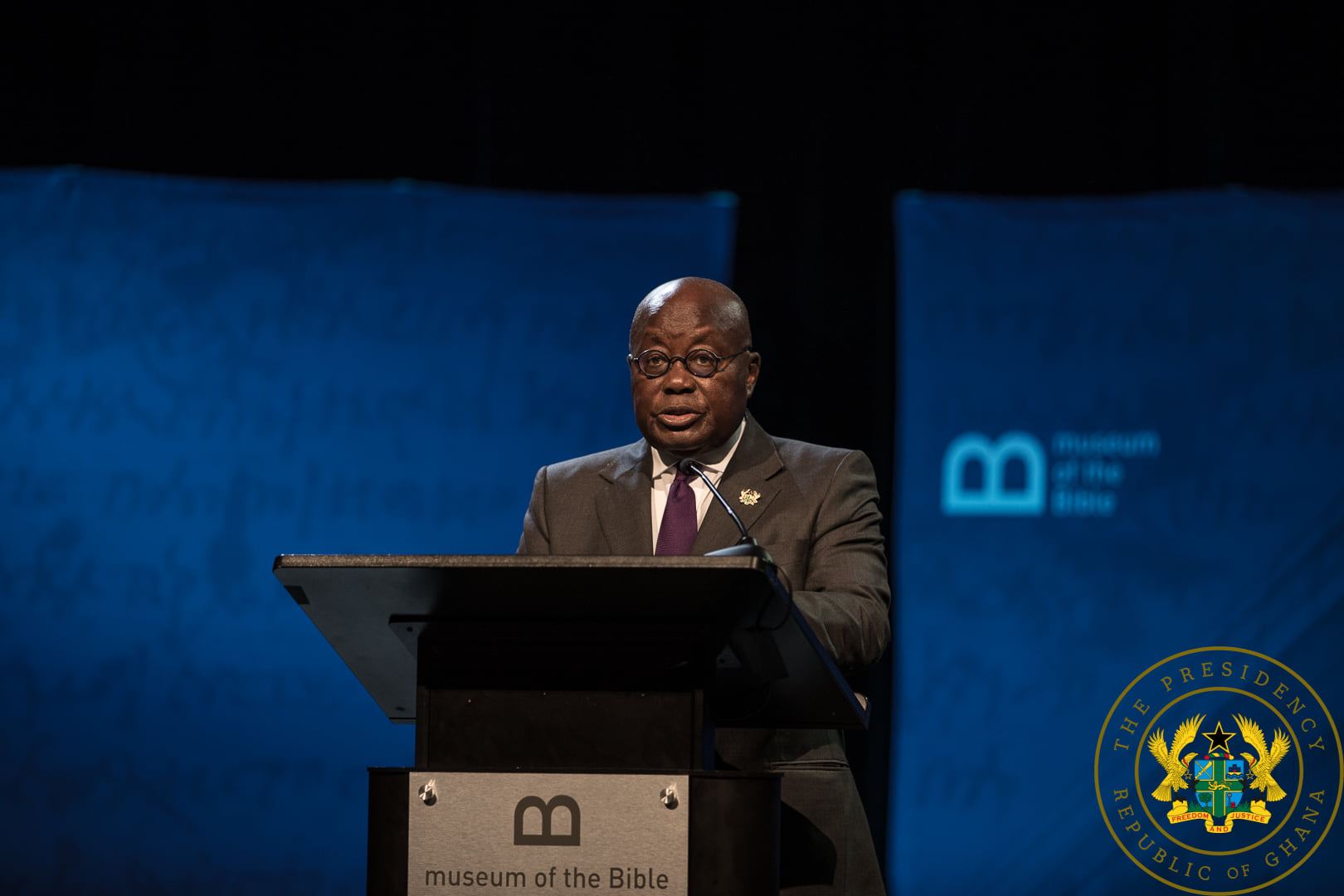 President Nana Addo Dankwa Akufo-Addo has stated that his vision for the country and Africa’s transformation is heavily influenced by the Bible.

“I am a Christian who is in politics and unashamed of asserting my Christian faith as part of my political calling and I freely admit that my vision for my country, and Africa’s transformation, is heavily influenced by the Bible,” he declared.

President Akufo-Addo made the declaration yesterday at the inaugural Africa lecture by the Museum of the Bible at a museum in Washington, DC, capital of the United States of America.

He said he was born into a family with deep Presbyterian convictions, with his maternal ancestry, including his great-grandparents, being part of the pioneer evangelists of the Presbyterian faith.

He said he was baptised a Presbyterian and changed to Anglican because of schooling, but added that Anglican or Presbyterian, the Bible was a focal point in their home and his parents found an apt scripture for every situation that came up in their lives.

President Akufo-Addo said whether as a lawyer or a politician he had always tried not to lose sight of the fact that his Christian faith should be an integral part of the practise of his chosen profession.

He added that the public had the perception that being a lawyer could pose problems that might be difficult to reconcile with being a Christian.

The President cited an often-quoted advertisement on a billboard for a law office in an American city to illustrate the bewilderment with the law that many people face.

Reading the advertisement: “Just because you did it doesn’t mean you’re guilty,” the President said lawyers would readily understand the point but “we can also appreciate the mischief that this will cause among the public”.

President Akufo-Addo noted that Christianity was a way of life and a legal practice covered all aspects of their everyday lives, and quoted “The Ivory Gate”, a legal novel by Sir Walter Beasant in which the author painted a most optimistic view of a lawyer in contrast with the way lawyers are usually portrayed in other books.

“The solicitor is always engaged in considering how best to guide his fellow-man through the labyrinthine world. He receives his fellow man at his entrance into life as a ward; he receives him grown up as a client; he advises him all his life, at every step, and in every emergency,” excerpts of what the President quoted read.

Speaking about politics, President Akufo-Addo said it was no less turbulent in the last 45 years, adding that he was dissatisfied with the condition of life of the majority of the people and that was why he struggled to get the opportunity to do something about it.

“The story of my struggles to become President of my country is well known. My experiences have been a testimony of God’s love, and a vindication of the words of our Lord and Saviour Jesus Christ, as quoted at Matthew 19:26, which states “With man this is impossible, but with God all things are possible.”

President Akufo-Addo noted that his faith in God was also the motivation for what he described as “a priority of priorities that we are undertaking in the country”.

“This is the construction of the National Cathedral of Ghana, which first brought us to this venue three years ago, in February 2019,” the President declared.

He explained that the National Cathedral addressed a missing link in Ghana’s architecture by providing a formal space for the religious activities of the state.

“Designed by the iconic global Ghanaian architect, David Adjaye, who designed the National Museum of African American History and Culture here in Washington DC, the National Cathedral provides an interdenominational space for worship and will serve to insert God at the centre of our nation building efforts,” President added.

He said they had integrated a Bible Museum and Biblical Garden as part of the project.

President Akufo-Addo stated that the Bible Museum of Africa and Biblical Gardens of Africa extended the National Cathedral project, which would transform Ghana, whose over 70 per cent population was self-proclaimed Christians, into a major centre of Christianity in Africa.