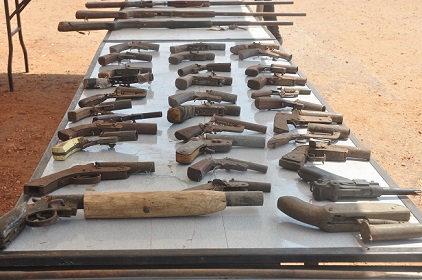 The National Commission on Small Arms and Light Weapons has embarked on a nationwide initiative to sensitise the public the dangers and other consequences of the possession of arms.

The initiative, which is through the use of Short Message Service (SMS), also aims at reaching out to the public about the dangers associated with arms ownership, their proliferation, illegal acquisition and abuse.

“This is the first time we are using SMS to reach out to our stakeholders and the general public. We are doing this because we want to use it as a medium to reach out to the public to educate and sensitise people to their responsibilities of particularly weapon owners.

“It is also to talk to potential weapon owners about the dangers associated with arms ownership, its proliferation and then its illegal acquisition and abuse, and what it can do to our economy,” a Deputy Director in charge of Programmes of the commission, Johnson Asante-Twum, told the Daily Graphic last Tuesday.

In addition, he said, the move was to remind weapon owners on their responsibility with regard to renewing their licences so that they did not become illicit in their hands.

For now the use of the SMS messages, he said, was only on Vodafone, and that the commission was in talks with the other mobile telephony service providers to use their platforms to get to subscribers on their networks.


Mr Asante-Twum said the SMS was only to complement the other sensitisation channels, including radio, television, community public education and sensitisation, town hall meetings and durbars.

In relation to those who could not read and write, he said the commission had plans to talk to the network providers to use voice messages, for instance, to reach out to such people in the various languages.

“Certainly, we have not left out those who cannot read or write; we have plans to reach out them as well,” he said.

He said the commission had so far received positive feedback, especially from those who understood the issue of weapon proliferation and its negative effects on the society and the country at large.

“We have received a lot of feedbacks on this SMS initiative. People have been very excited about it. They are happy that we are reaching out to a lot of people through this medium.

“Then you have other people who do not have any idea about it at all and you get them calling the office line that we have put out to make enquiries,” he said.