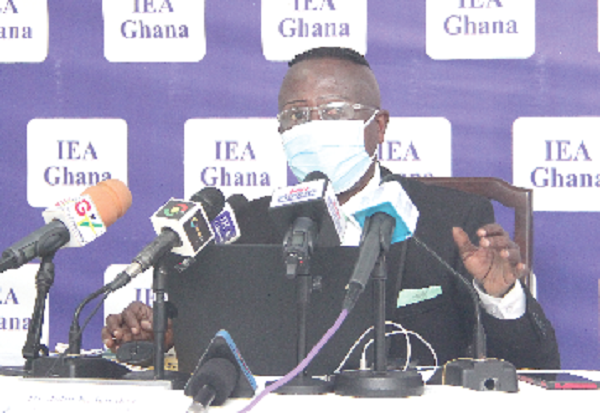 The Institute of Economic Affairs (IEA) has urged the government to restrict tax exemptions to qualified charity and investors needed for critical investments.

The Director of Research at the institute, Dr John K. Kwakye, at a news conference on the 2022 Budget and Economic Policy in Accra yesterday, said the Tax Exemptions Bill, which was before Parliament, presented a window for the government to curtail exemptions provided on political and protocol grounds, as they were often abused.

The conference provided an avenue for the institute to share its views on the budget in terms of how it met public expectations and responded to issues of national concern.

Some areas of focus were resource mobilisation, the economic situation in the country, resource allocation, the budget deficit, public debt and some key policies mentioned in the budget, including those that hinge on youth employment.

That, he said, had contributed to the long-standing challenge of revenue mobilisation, with efforts to increase it falling considerably short of that of other developing countries.

“We have called for these loopholes to be plugged for adequate revenue to be raised to support the country’s development,” he said.

“We are pleased to note that the budget proposed measures to plug some of these loopholes, in addition to other measures to scale-up revenue,” he added.

Particularly, he said, the IEA was pleased that the budget duly recognised the importance of revenue compliance and enforcement, adding: “It is hoped that compliance by professionals generally will also be strictly enforced.”

“The Minister of Finance indicated the intention of the Ghana Revenue Authority (GRA) to continue with its compliance measures to expand coverage and plug revenue leakages, including through amendment of the Income Tax Act, 2015 (Act 896) that provides a simplified system of tax compliance for the informal sector and small-scale individuals in business,” Dr Kwakye said.

Touching on the introduction of the E-Levy, Dr Kwakye said the institute had some reservations on its introduction, although it presented an innovative means to scale-up domestic revenue mobilisation.

“The argument about widening the tax net is mostly about roping in persons and businesses that mostly operate in the informal sector, but a lot of the persons and the businesses which are now being called on to pay the E-Levy on mobile money transactions, on top of what they pay to telecommunications companies, to us, seems to amount to subjecting them to triple taxation,” Dr Kwakye added.

For the IEA, the budget contained some policy initiatives that were key for the future progress of the country, including the ‘Employment policy’ and the Ghana CARES programme.

He said the IEA had, in the past, argued that the government could only offer limited, quality, permanent jobs to the youth, and that it must largely facilitate private sector-led job creation by addressing the myriad of obstacles facing the sector.

Beyond that, he said, there was the need for the government to offer opportunities for the youth to acquire employable skills and the ability to create their own jobs through training and other capacity-building programmes.

“Government policies aimed at offering skills training to and building the entrepreneurial capacity of the youth, while supporting the private sector to grow, promise to help reduce the unemployment situation and should be followed through,” Dr Kwakye said.

Going forward, the IEA advised the government to take note that the risk of debt distress and service burden had increased.

It also noted that the Ghana CARES programme contained important pillars for transforming the economy into a modern, resilient and, ultimately, ‘beyond-aid’ one if implemented as planned.