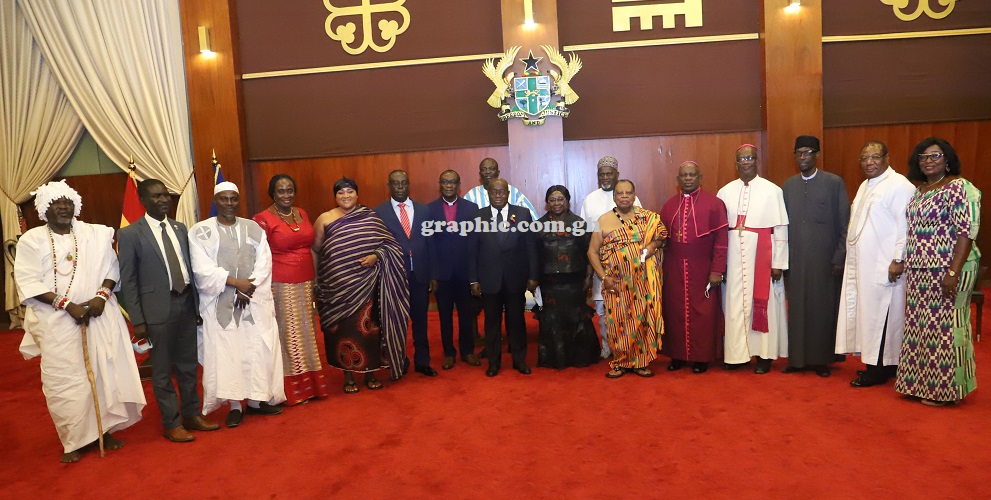 President Akufo-Addo with members of the Governing Board of the National Peace Council at the Jubilee House. Picture: SAMUEL TEI ADANO
30.5k Shares

President Nana Addo Dankwa Akufo-Addo has inaugurated the Governing Board of the National Peace Council (NPC), with a call on the members to continue to employ appropriate strategies to sustain the prevailing peace in the country beyond the 2020 elections.

He also asked them to cooperate and work together to create an environment that would enable the people to come out to vote freely and peacefully. 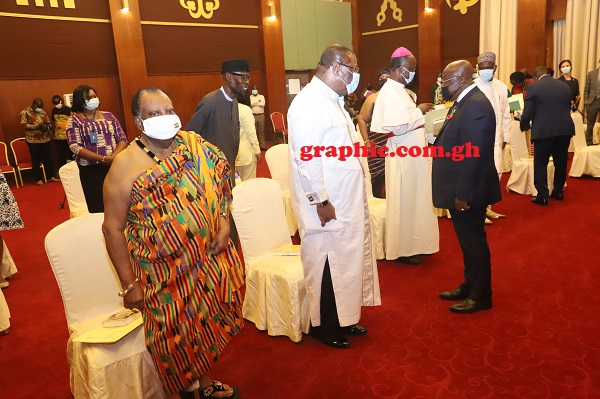 The NPC is an independent statutory national peace institution established by Act 818 in 2011.

Act 818 mandates members to facilitate and develop mechanisms for conflict prevention, management and resolution and build sustainable peace in the country.

President Akufo-Addo said the NPC had become a point of reference for addressing conflicts, particularly those related to elections, and, therefore, urged members of the board to continue with the good work done by their predecessors.

“The nation expects you to be up to the task. For my part, let me assure you of my wholehearted effort and that of the government to ensure that peace prevails in the country as we enter the last four weeks of electioneering.

“Ghana has rightly earned the reputation as the pacesetter in democratic governance on the continent, a reputation I am determined to uphold and, indeed, enhance prior to, during and after the December elections,” he said.

The President said the people could bear testimony to the amount of work undertaken by the Most Rev. Prof. Emmanuel Asante-led governing board, which he said had deepened the credentials of the country as a haven of peace and security on the continent and in the world.

He mentioned the role of the council to include what it did during and after the passage of the Vigilantism and Related Offences Act of 2019 (Act 999) initiated by him.

According to the President, the board provided the platform for dialogue towards the preparation and adoption of two important documents — the roadmap and the code of conduct for eradicating vigilantism — which have been endorsed by the major political parties in the country.

A Minister of State at the Ministry for the Interior, Mr Bryan Acheampong, said the NPC had made some gains, including the establishment of an election day early warning mechanism at both the national and the regional levels as part of its conflict prevention management and resolution initiative.

He said the council had also established 23 mediation committees ahead of the December elections.

Members of the committees would intervene to prevent conflicts that might arise before, during and after the elections, he said.