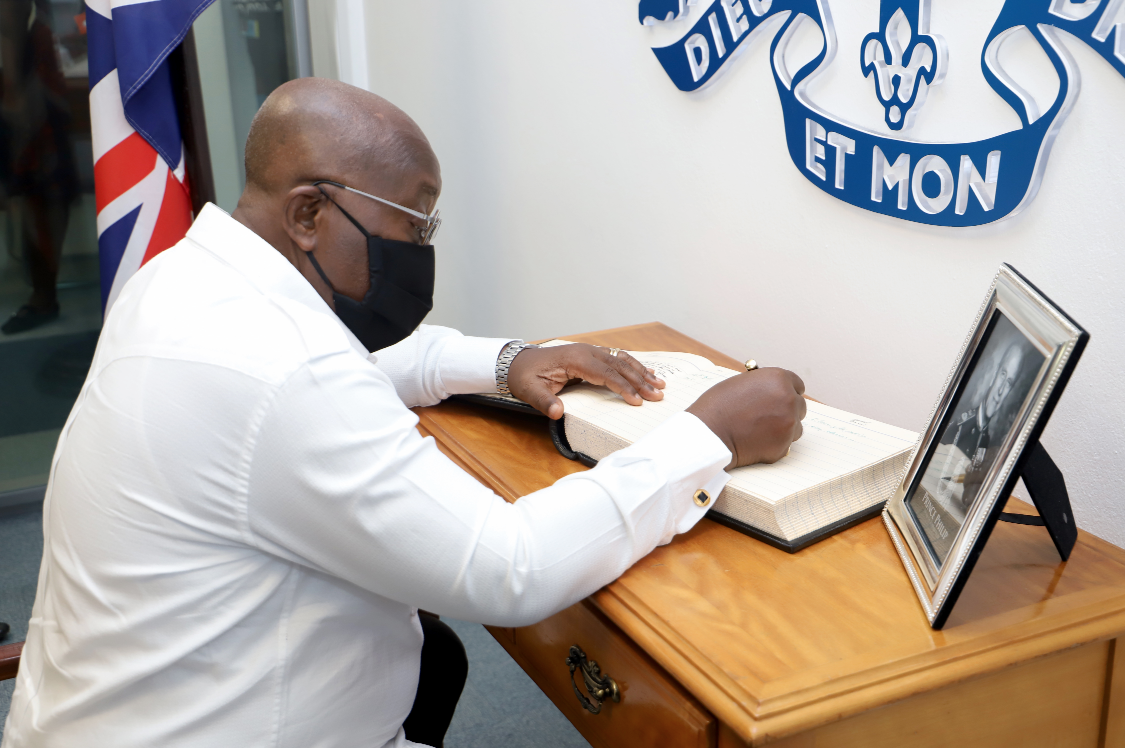 President Nana Addo Dankwa Akufo-Addo yesterday signed the Book of Condolence for the late Prince Philip, the Duke of Edinburgh, at the British High Commission in Accra.

Prince Philip was the husband of Queen Elizabeth II of the United Kingdom of Great Britain and Northern Ireland and member of the Royal Family.

The President wrote: “We were all very sad in Ghana to learn of the passing of Prince Philip, the Duke of Edinburgh. He has many admirers in Ghana who have vivid memories of his visit to our country.

“We appreciate very much the works of this body, the Duke of Edinburgh Awards Scheme, which has benefited hundreds of thousands of Ghanaians.”

He added: “We express our deep condolences to Queen Elizabeth II in her period of mourning and loss. We pray for God's strength for her, her children and family and also ask for God's blessing in this period. May his soul rest in peace.”

Earlier in a statement, President Akufo-Addo had expressed his condolence to Queen Elizabeth and the British Royal Family on the death of Prince Philip.

He had described the late Duke of Edinburgh as Queen Elizabeth’s “devoted companion of the last 73 years”.

A statement issued by the Presidency recounted the Queen's visit to Ghana and said “the Ghanaian people have excellent memories of his dynamic and engaging personality”.

It further said Prince Philip’s life “had a positive impact on us in Ghana. Over 750,000 young Ghanaians have benefitted from the Duke of Edinburgh Awards Scheme, the great initiative he established in 1956, some 65 years ago, to unearth talents among young people the world over”.

“It is now known in Ghana as the Head of State Awards Scheme and I had the honour, two days before his death, of cutting the sod for the construction of its own administrative office building, making Ghana one of the few countries in the world and second in Africa to have such an office,” it added.

According to the statement, the Duke's place in Ghanaian history was secure “and we appreciate very much his contact with us”.