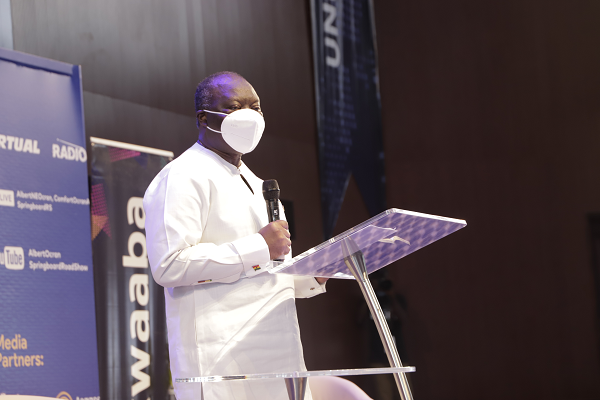 The Minister of Finance, Mr Ken Ofori-Atta, has called for increased political commitment from the governments of West African states to combat illicit financial flows.

He said such commitment and political will would help eliminate the criminal activities such funds were used to support.

He noted that a reduction in the menace would help reduce the unlawful outflow of financial resources from West Africa and also contain terrorism and political insurgence, which were gaining currency in recent years.

Mr Ofori-Atta expressed concern over the fact that being grey-listed by the Financial Action Task Force (FATF) risked becoming a stranglehold on the region by eroding confidence in the financial system and freezing banking assets worth over $500 billion.

The Finance Minister made the call when he addressed regional experts in anti-money laundering (AML) and counter terrorism financing CTF) at the 36th Technical Commission/Plenary Meeting of the Inter-Governmental Action Group against Money Laundering in West Africa (GIABA) in Accra Thursday.

The meeting, which is also the 24th GIABA Ministerial Committee (GMC) meeting, will end on Saturday.

Mr Ofori-Atta said a strong political will was needed to rid the countries and the region at large of the malpractice and save them from being put on the grey list of countries with AML and CTF regimes.

He noted that the money laundering and terrorist financing were becoming increasingly complicated and West African states must be innovative in identifying and confiscating illicit funds before they were used by criminals for nefarious activities, including terrorism and political violence.

He said the malpractice continued to pose enormous risks to the global financial system, peace and socio-economic development, with West Africa’s case being peculiar.

Given that the subregion was a major region of concern regarding terrorism financing and its activities, he said there was the need to strengthen collaboration among member states in order to curb the menace, with all its associated predicate offences.

“The phenomenon is underpinned by several factors, including the presence of large, informal, cash-based economies, weak and porous borders, political instability, ethnic and communal violence, corruption, poverty and unemployment. There is no better time than now and this is really a call to arms to sit up and protect our region,” he said.

Ghana completed a mutual evaluation in 2016, after which it was put in the FATF list of countries with strategic deficiencies in their AML/CTF regimes.

It successfully exited the grey list last year, after revamping its AML/CTF strategies, including the enactment of the Anti-Money Laundering Act, 2020 (Act 1044) and the Real Estate Agency Act, 2020 (Act 1047), the establishment of the Beneficial Ownership Register and the Non-Profit Organisation Secretariat, as well as strengthening some existing regulatory bodies.

Mr Ofori-Atta said while Ghana’s experience had been tough, the country was now well placed to support its peers to go through their second round of mutual evaluation.

The Finance Minister said it was of concern that although GIABA comprised 17 members, only nine of them had gone through the second round of mutual evaluation, during which their AML/CTF systems, policies and strategies were examined to identify deficiencies and propose solutions to them.

“It is evident that we are racing against our mutual evaluation calendar, and as a member of a global community, it is expected of us to meet such timelines to be at par with the broader calendar, as was discussed at the First Extraordinary GMC meeting in October last year,” Mr Ofori-Atta pointed out.

Justice Aba commended Ghana for implementing before term the FATF action plan that was mutually agreed with the Joint Africa/Middle East Group, leading to the country’s early exit from the monitoring process.

He said the country was able to match words with deeds.

He explained that the experience in the process would “now be very enriching and inspiring for other member states who have joined the said process or who will do so very soon”.

Mr Duah, whose outfit, the FIC, coordinates Ghana’s response strategy on AML/CTF, commended GIABA and FATF for the support in developing and implementing the action plan, leading to the country’s exit.