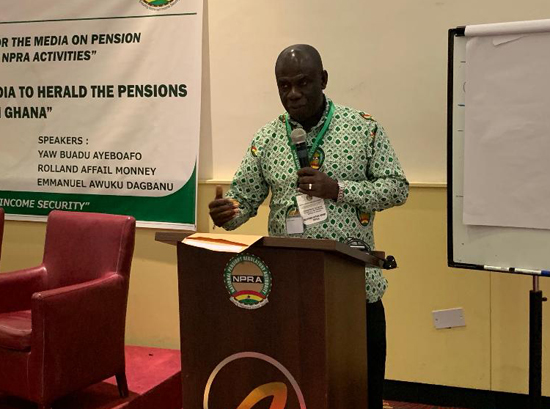 The National Pensions Regulatory Authority (NPRA) has retrieved GH¢3.1 million from companies that defaulted in the repayment of pension contributions under the tier two scheme.

It has also taken 15 employers to court, while others are being processed for prosecution, after they were found to have defaulted in the payment of the mandatory contributions..

The amount was recovered out of the GH¢4.7 million expected from 60 defaulting companies between July 2020 and January 2021.

The Chief Executive Officer (CEO) of the NPRA, Mr Hayford Attah-Krufi, made this known at a media engagement by the authority in Accra Tuesday.

Mr Attah-Krufi intimated that the NPRA had now received legal backing to prosecute employers who failed to pay second tier pension contributions of their workers.

He said the prosecutorial powers were granted the NPRA by the Attorney-General's Department in 2018 to help ensure the prompt payment of workers' contributions under the two tiers.

"Another vital success story to tell is that we, as an authority, have secured powers to prosecute.

"The provisions of the National Pensions Act 766 of 2008 mandate employers to register and contribute to the basic scheme, the Social Security and National Insurance Trust (SSNIT).

"But the tier two schemes were not always being complied with, leading to some employees of such establishments being disadvantaged at periods of their lives when they would be no longer able to fend for themselves, thereby negating the authority's mandate," he said.

Mr Attah-Krufi stated that the NPRA, as a regulator, needed to be clothed with the requisite power by Act 766 to prosecute and recover unpaid contributions and other infractions under the act and regulations.

“Act 766 provides, under Section 3(3)(b), the rate of contribution for tier two schemes, and Regulation 105 of L.I. 1990 provides sanctions for the breach for the present actions that have been undertaken,” he said.

He noted that the NPRA applied for prosecutorial powers from the Attorney-General in April 2018 and obtained an executive instrument (E.I. 26) to prosecute defaulting employers on the tier two schemes in July 2018.

The CEO of the NPRA said since July 2020, the authority had issued final demand notices to 60 employers as a final reminder to make good their indebtedness or be prosecuted.

According to him, the response to the final demand notices was encouraging, since about 70 per cent of the employers who received the demand notices contacted the NPRA and either made good all of their indebtedness or made partial contributions to cover their employees.

"A few of the employers who did not respond are in court, with the first batch of six employers arraigned on criminal summons since December 2020," he said.

He added that the authority had decided to deal with the defaulting employers in batches of 20 at a time.

He said out of the first batch of 20 employers, six did not respond at all and had been summoned to court for prosecution.

Currently, 15 employers were being processed for prosecution, he added.

Beyond the prosecution powers, he said, the authority would, in April, start a Pensions College in Ghana and introduce a risk-based supervision system (RBS).

"I am pleased to share with you a few essential things that we at the NPRA are doing to push the industry forward. We have grown as the sole regulator of the pensions industry in the country.