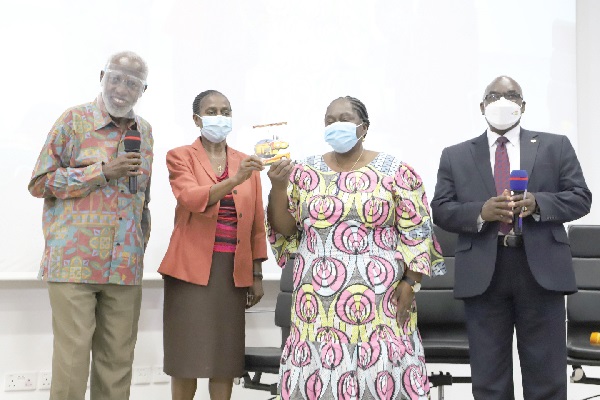 Dr Esther Ofei-Aboagye, Chairperson of the Star-Ghana Foundation, and Dr Grace Bediako (2nd left), Board Chairperson of the Ghana Statistical Service, launching the Ghana at 100 Development Framework at a ceremony in Accra. Those with them are Professor Stephen Adei (left), Chairman of the National Development Planning Commission, and Dr Kodjo Mensah-Abrampa (right), the Director-General of the NDPC. Picture: GABRIEL AHIABOR
30.5k Shares

The National Development Planning Commission (NDPC) has launched a long-term national development plan and called on all political parties to link future manifestos to the plan for sustainable development.

The plan, dubbed: “[email protected]”, spells out development priorities in key sectors and provides strategic interventions for the consolidation of the country's democracy in the effort to achieve key development milestones by 2057, when Ghana turns 100.

The document sets out Ghana's development agenda in four thematic areas — Governance, peace and security; the economy, with focus on building an industrialised and resilient structure; Social pillar, which highlights measures to bridge inequality and gender disparity gaps, while promoting quality human resource, and the Environment pillar, which focuses on preserving the country's natural resources.

The plan was launched by the Chairman of the NDPC, Professor Emeritus Stephen Adei, at a ceremony in Accra last Tuesday.

According to him, the document was a fusion of a number of development plans and national agendas.

Drivers of the plan

Prof. Adei explained that the document provided an agenda of 10 drivers of sustainable development that served as a prerequisite for the realisation of the Sustainable Development Goals (SDGs).

The others are promoting science, technology and innovation, infrastructure development, affordable energy and land reforms.

The NDPC Chairman said unlike political party manifestos that fell short of providing funding sources for their policies, the long-term plan had provided sources of funding for all the policies.

Additionally, he said, value for money mechanisms had also been provided in the document.

Speakers at the event described the launch of the plan as a major step towards sustainable national development since it would serve as a guide to political parties to develop their manifestoes based on national priorities.

They agreed that if the plan was implemented well, it would bring an end to the situation where political parties developed their manifestos around the four-year electoral cycle.

Prof. Quartey said although political party manifestos contributed immensely to the national development agenda and the strengthening of democracy, it was important to link the promises to the larger development plan.

“Linking manifestos to the National Development Plan, as well as the continental development agenda, will reduce the number of unfulfilled promises by political parties when they win power,” he said.

Prof. Ayee said although Ghana had made considerable gains in tackling development challenges since the beginning of the Fourth Republic in 1992, more could have been achieved if there was a long-term plan for sustainable development.

He observed that in the absence of that, the country’s development trajectory had not been consistent because political parties that won elections and formed governments implemented policies that were not sustainable.

He said having launched the development blueprint, there was the need for the citizenry and groups to demand accountability by tracking government’s performance.

For her part, Dr Offei-Aboagye said the citizenry needed to get involved in the governance process and ensure that political parties aligned their manifestos to the development plan.

Ghana has been pursuing many development initiatives since the colonial era, all targeted at improving on the country’s development process.

That development plan gave birth to key projects such as the Korle Bu Teaching Hospital, the Takoradi Harbour and the railway system.