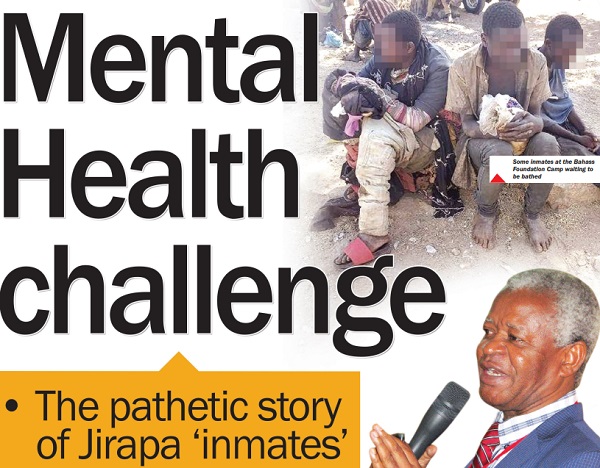 It looked like a refugee camp. A dusty courtyard packed with people sprawling out on mats besides a large church which doubles as a dormitory outside prayer times at Zongo, a suburb in Jirapa in the Upper West Region.

Most of these people have spent months or even years at the Bahass Foundation Camp, where they are taken care of after they have been neglected by their families.

“In our society, most of the mentally ill are considered to be possessed by bad spirits. Everyone is afraid of them,” the Founder of the Camp, Charles Zinyeni, said.

Mr Zinyeni himself grew up in Wechiau in the Wa West District and moved to Jirapa in 2001.

In 2003, while walking through the main street, Mr Zinyeni had his first direct encounter with one of the homeless “madmen”.

“There was a mentally ill person who was searching through a rubbish bin, looking for food,” he said.

Through a religious compulsion, Mr Zinyeni said he forced himself to look at the man as a sane person.

“From that day on, every day I would walk through the streets of Jirapa to see where they slept.

Later, I began to meet them, I went towards them and that was how I began to understand that they are people who also want to be loved like everyone,” he recounted.

Those at the Jirapa Bahass Foundation Camp are just a small sample of people in the country who have mental health conditions, considered at best as public nuisances and at worst as being possessed by evil spirits.

In a country of over 30 million with only three fully functioning public psychiatric hospitals in the southern part of the country - the Accra Psychiatric Hospital and Pantang Hospital both in the Greater Accra Region and the Ankaful Psychiatric Hospital in the Central Region, a group of committed volunteers of the Ghana National Association of the Deaf (GNAD) have conducted a study to assess the knowledge of and barriers to mental health services among people with hearing impairment.

Their aim is to generate evidencebased information so as to provide vital help for one of the country’s most vulnerable groups, hearing impaired people.

The research findings showed that despite national efforts to improve access to mental health, mental health services of the hearing impaired population had not been encouraging.

Discouraging the lumping together of mental health cases of people with disabilities in the country, the study particularly focused on the hearing impaired because they cannot communicate effectively with healthcare workers.

The fourth was working in partnership with the civil society organisations (CSOs) to improve uptake of mental health services.

Supported by Ghana Somubi Dwumadie (Ghana Participation Programme), a four-year disability programme in Ghana, with a specific focus on mental health and funded with UKaid from the United Kingdom (UK) government, the study involved 487 participants made up of people with hearing impairment, as well as mental health conditions, caregivers, CSOs working on mental health, health workers and hearing impaired people in four regions, Upper West, Northern, Greater Accra and Central.

On what informed the choice of the four regions, the Principal Investigator, Dr Wisdom Kwadwo Mprah, said: “These four regions present diversity in terms of development and culture, which can influence perceptions and attitudes towards hearing impaired persons, mental health, access to services and how hearing impaired people navigate the mental health services sector.”

He also stated that the Greater Accra Region was included in the list for the purpose of conducting studies and national level advocacy.

“Because of its diversity, the region has hearing impaired people from all over the 16 regions. Stress related to city lifestyle has resulted in many members of the hearing impaired community becoming survivors of mental health problems. Their experiences will be essential to inform our participatory research. Greater Accra also houses all the relevant Ministries, Department and Agencies (MDAs) which will be the focus of our national advocacy,” he added.

“The Central Region is in the southern part of the country with 22 districts. Based on the 2010 Population and Housing Census, the region has 10,702 hearing impaired people and 9,819 people with speech disabilities (GSS, 2010).

“This represents a sizeable population which shall be relevant to this project. Like the Greater Accra Region, the Central Region has a hearing impaired population from all 16 regions of the country.

“The Northern and Upper West regions are less developed with the Northern Region being quite developed among the five northern regions.

“There is significant rural – urban migration to Tamale compared to other regions, with little or no idea about how hearing impaired people manage their mental health.

“At Tamale, there is also a Teaching Hospital which has services for mental health. Both the Northern and Upper West regions have 10,838 and 4,564 deaf populations respectively and 7,529 and 2,724 populations with speech impairment respectively (GSS, 2010),” he said.

The Chief Executive Officer (CEO) of the Mental Health Authority (MHA), Prof. Akwasi Osei, who confirmed the rise in the presence of mentally ill persons on the streets in an earlier interview with the Daily Graphic, attributed the challenge to the lack of funds to treat and rehabilitate them.

He said although it was unfortunate that mentally ill persons were on the streets, Ghanaians should blame themselves for the problem, as they had not been sensitive enough to call on the central government to act. Governments had also not been sensitive to listen to the experts, Prof. Osei posited.

He said in some instances, rehabilitated mentally ill persons had been abandoned by their families and they find themselves on the streets, begging for alms.

Prof. Osei said the assessment found about 15,000 mentally ill persons on streets across the country.

There were about 1,600 of them in Accra and Tema alone, with the figure expected to increase to about 2,000.

At a well-attended dissemination workshop for stakeholders in Wa recently, Dr Mprah noted that mental illness was a global concern, since it could affect the well-being of the family and community at large.

Dr Mprah explained that this was more pronounced in people with disabilities and higher among those with hearing impairment.

“Most of the respondents said they understood addiction, depression, anxiety, mental illness, emotional disorder. Terms that were not familiar to the respondents included manic, paranoia, schizophrenia, delusion and neurosis,” he stated.

With no disaggregated data on the hearing impaired with mental issues in the country, very little is known about them leading to the challenge of how to navigate their mental health problems.

“Mental health issues affecting persons with disabilities in general have been cursorily addressed.

The study, he said, recommended better training programmes for health workers and caregivers on how to handle hearing impaired people, especially those with mental health conditions.

Dr Mprah advised the airing of television programmes, specially designed and directed at the hearing impaired since they could see and read, to enable them understand the government’s policies and programmes as well as have easy access to information.

He also advised the GNAD to bring together parents and caregivers of the hearing impaired with mental health conditions to serve as informal social groups where they could seek the needed support and solace.

The Executive Director of GNAD, Juventus Duorinaah, said it took a year to complete the study with a focus on how to assist the target group to restore their self-respect.

He said many of the people suffering from hearing impairment could live normal lives if properly treated.

Mr Duorinaah called on the public not to discriminate or stigmatise the hearing impaired who were also having mental health conditions, but to show compassion to them in their communities.