Redevelopment works on three different tourist centres in the country have delayed.

This follows the delay in the release of funds to complete the GH¢1.64 million project on schedule.

The target was to complete construction works to give a facelift to the facilities before the end of the first quarter of the year.

However, following the delay in the release of funds from the Ministry of Finance, the five contractors awarded contracts for the works have all abandoned the sites after completing about 27 per cent of the projects, on the average.

The projects to help boost the country’s tourism potential is an initiative of the Ghana Tourism Authority (GTA).

It is based on the medium-term goals set out in the National Tourism Plan to accelerate the development of tourism under the Ghana COVID-19 Alleviation and Revitalisation of Enterprises Support (CARES) 'Obaatan pa' initiative.

The upgrade works were featured in the 2022 budget as part of measures by the government to enhance the capacity of key tourism institutions and improve coordination with the private sector for job creation and economic expansion.

When the Daily Graphic team visited the Aburi Botanical Gardens a month ago and last Friday, it noticed that many aspects of the project were still not executed, four months after the scheduled completion date.

There was an enhanced entry gate, a new car park on the immediate left of the entry gate had been developed, with demarcations having been made, but the erection of a platform for stage performances remained uncompleted.

Work on a new lavatory was at the footing level.

The team also saw construction materials, including sand, gravels and a water reservoir, abandoned near the site where the lavatory was to be built.

The rest, including the enhancement of the exit gate, visitor receptive facilities and play ground, as stated in the 2022 Budget, were not seen at any part of the 64.8-hectare botanical garden.

The Chief Executive Officer (CEO) of the GTA, Akwasi Agyeman, in answers to Daily Graphic queries dated July 25, pursuant to the Right to Information (RTI) Act, 2019 (Act 989), said the projects were at various stages of completion but had delayed because of the slow pace at which funds were released.

Although the 2022 budget gave March 2022 as the completion date for the projects, Mr Agyeman said all projects (first phase) were expected to be completed by the first quarter of next year.

He said the Aburi Botanical Gardens rehabilitation works consisted of the construction of an entrance gate, a car park, a stage at an event venue, an exit gate and a seven-seater washroom.

At a cost of GH¢595,376, the upgrade of the Aburi Botanical Gardens was currently 33.33 per cent complete, he explained.

He also stated that the redevelopment of the Yaa Asantewaa Mausoleum consisted of the rehabilitation of the burial ground of the iconic queenmother of Ejisu, which included a fence wall and landscaping.

He said it also included the renovation of the existing tomb and the construction of a statue of Yaa Asantewaa, who took up arms and led a group in the fifth and final Anglo-Ashanti War against the British in March 1900, which became known as the Yaa Asantewaa War. 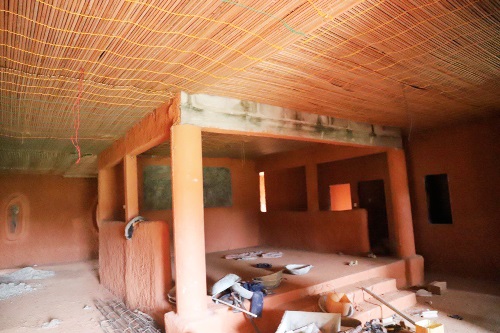 Mr Agyeman said the Yaa Asantewaa Museum project, to cost GH¢178,801, consisted of the rehabilitation of the existing museum, which was destroyed by fire in 2021, and the construction of a fence wall, a seven-seater washroom, a tourist information centre, a car park and four summer huts.

He added that work done on the project was presently 40 per cent.

The Field Supervisor of the Aburi Botanical Gardens, Dominic Adiirikame, in an interview with the Daily Graphic, stated that the redevelopment works, when completed, would be beneficial and help the facility to generate enough revenue for the state.

He said while the facility received more than 60,000 tourists a year, it could only boast a four-seater toilet, which was inadequate to serve the patrons.

“We see this project as very significant because the facility will experience some form of facelift when completed on the entrance gate, the car park, the toilet facilities, the event centre and the exit gate,” he said.

“As you entered, you saw that the entrance has been redesigned beautifully. We are hoping that when the ongoing works are completed, patronage will increase,” Mr Adiirikame, who is also the Chief Tourist Guide at the gardens, stated.

Some tourists who interacted with the Daily Graphic during the visit expressed excitement at the level of work done on the entrance gate.

One of them, Daniella Lehavi, said the lavatory was inadequate and, therefore, the move to develop additional toilets was a step in the right direction.

Ms Lehavi, a middle-aged woman from the United States who often visits the country with tourists, said the government needed to make efforts to improve the quality of tourism assets in Ghana.