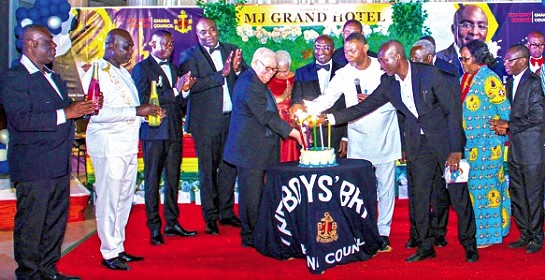 Moses Foh-Amoaning (5th from left), President of the Boys Brigade; Dr Lawrence Tetteh (4th from right), Founder of the Worldwide Miracle Outreach, and other dignitaries lighting candles to mark the anniversary, while Dr Bawumia (middle) looks on
30.5k Shares

The Vice-President, Dr Mahamudu Bawumia, has urged the elderly in society to help nurture and train the next generation towards the development of the country.

“It is our collective responsibility to nurture and train the next generation to be in a position to inherit things that we will leave behind, since they are heirs to the material and immaterial things,” he said.

Dr Bawumia, who was speaking at the 70th anniversary dinner and awards night of the Boys Brigade (First Accra Company) in Accra over the weekend, observed that since character formation was developed as children grew and especially as they attained their teen years, living exemplary lives was utmost “when we want to inculcate Godly values, ethics or norms in our children”.

The Boys Brigade is an international, inter-denominational Christian youth organisation founded by Sir William Alexander Smith in Glasgow, Scotland on October 4, 1883, with the object of advancing the Kingdom of Christ among boys.

Based on its foundational twin pillars of religion and discipline, the organisation seeks to provide a meaningful and enjoyable programme, one that balances four areas of life — educational, physical, social and spiritual.


In 1951, a police officer in the then Gold Coast, John Benjamin Koomson, who was sent to the United Kingdom (UK) for advanced training, joined the 33rd London Brigade Company, trained as a brigade lieutenant and returned with the desire to restore the Boys Brigade in Ghana.

With the help of his brother-in-law, Aikins Hawkson, Koomson sold the restoring idea to the General Superintendent of the Methodist Church in the Gold Coast, Rev. Gaddiel Acquaah.

After administrative approval, more than 100 boys from the Charles Layne, Royal and Hansen Road Methodist Boys’ schools were recruited to form the First Accra Company, which was inaugurated on August 2, 1952.

Currently, the Boys Brigade has over 700 companies and over 38,000 boys. Together with the Girls Brigade, there are over 100,000 members in seven Christian denominations in the country, including the Methodist Church Ghana, the Presbyterian Church of Ghana, the Anglican Church, the AME Zion Church, among others.

Dr Bawumia, who was a member of the Boys Brigade in his formative years, said if the brigade would want boys to attain a vibrant and enduring relationship with the Lord Jesus Christ in an ever-changing world, it behoved the elderly to nurture and equip boys in Godly principles.

That, he said, must be achieved by leaders who were spiritually upright and it must be done through education and living exemplary lives.

The need for education, he said, led to the introduction of the free senior high school (SHS) and free technical and vocational education and training (TVET) policy by the government to equip Ghanaian children with the necessary skills and tools for them to become vibrant in the future.

The Vice-President urged the youth to take the digital agenda of the government seriously, since it was aimed at enhancing their capacity.

He paid tribute to the forbears of the Boys Brigade and said its principles were very fundamental to every household, group, organisation and the nation at large.

He donated a double-cabin pick-up vehicle to the brigade to enhance its activities and commended the award winners for their hard work, dedication and service to the organisation.

The President of the Boys Brigade, Moses Foh-Amoaning, for his part, urged the members to focus on their object, which is to advance the Kingdom of Christ among boys at all times.

“It is not an officers and captains brigade but a boys and girls brigade, so let us focus on the boys, since we the leaders are only a means to an end, which is bringing this children up in the knowledge of the Lord,” he stressed, adding that the Boys Brigade was not just about Christian and regimental training but also education.

He pointed out that young people were now interested in artificial intelligence, robotics and innovations and so “we are connecting to research institutions that will grow and develop the talents of young people in these areas and also develop their creative instincts”.

To that end, Mr Foh-Amoaning said, the Boys Brigade would soon sign a memorandum of understanding (MoU) with the National Theatre to grow the creative abilities of the boys and girls.

“We want to grow the brigade across the country and we are targeting over 10,000 boys and girls over the next years,” he added.

He, therefore, appealed for infrastructure, logistics and vehicles to enable the Boys Brigade to carry out its mandate effectively.