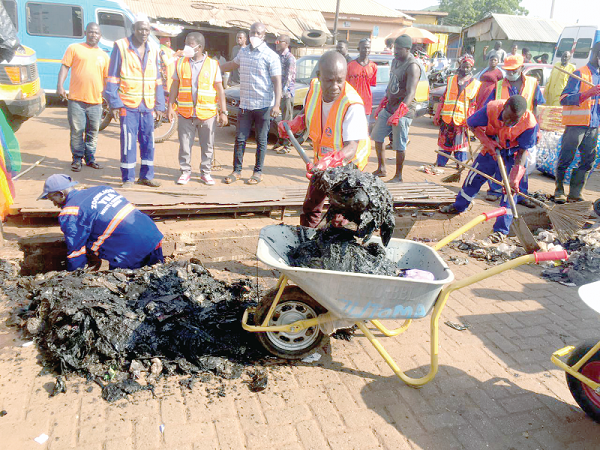 The Sanitation Chief of Choggu in Tamale, Sabta Naa Iddrisu Abdulai, showed the way by leading a team of volunteers and stakeholders to clean up the central business district (CBD) of the Tamale metropolis last Tuesday morning when the Graphic/Zoomlion clean-up train arrived in the regional capital.

The presence of the Sanitation Chief, who is well known for championing sanitation issues in the metropolis, attracted a section of the public and some drivers at the various lorry terminals who joined in their numbers to rid the area of filth.

The exercise was organised to round off the Graphic/Zoomlion Sanitation Dialogue series in the Northern Region.

At about 6: 30 am, the stakeholders and the volunteers assembled in front of the Vodafone Ghana regional office, cleared choked gutters and swept the shoulders of the principal streets.

They later moved to the main lorry terminal where they cleared choked drains and volumes of rubbish that had littered the entire terminal.

Workers of Zoomlion conveyed the heaps of refuse in trucks to the refuse dump.

When the team arrived at the lorry terminal, it was observed that the entire place was littered with polythene and paper bags, while some heaps of rubbish were left unattended to.

It was also observed that there were no dust bins at the terminal for drivers and passengers to dispose of rubbish.

Sabta Naa Abdulai expressed worry about the situation and called on authorities to as a matter of urgency allocate bins to the various lorry terminals to ensure proper disposal and management of waste in the metropolis.

“The sanitation situation in the metropolis is not encouraging and the authorities need to urgently map out strategies to address it,” he said.

While commending the Graphic Communications Group Limited and Zoomlion Ghana Limited for embarking on the exercise to keep the metropolis tidy, the sanitation chief urged the residents to keep their surroundings clean so as to prevent the outbreak of sanitation-related diseases.

The Communications and Corporate Affairs Director of Zoomlion, Mrs Emma Osei-Duah, expressed satisfaction with the exercise and said it would go a long way to whip up the residents’ interest in ensuring proper sanitation.

She asked the public to contact the various offices of Zoomlion to acquire dust bins, noting, “With the ‘One Million Bins’ initiative, any household or individual who needs some can contact our offices for the necessary arrangement.

We also have some arrangement on waste collection.”

For his part, the Chief Sub-Editor of the Daily Graphic, Mr Alhassan Zakaria, thanked all the stakeholders and volunteers for turning out in their numbers to participate in the exercise.

He said keeping the environment clean was a shared responsibility, for which reason all must prioritise issues of sanitation in their respective areas.