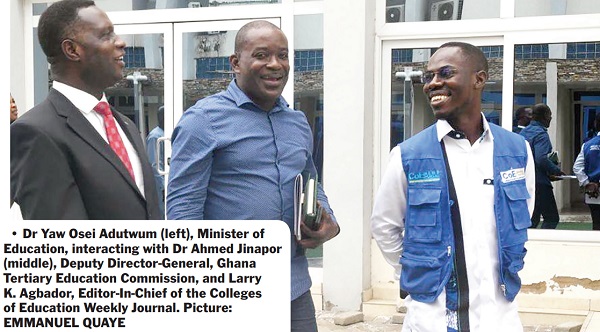 The government has released GH¢57.460 million to the 46 colleges of education (CoEs) for the feeding and allowances of teacher trainees.

The Minister of Education, Dr Yaw Osei Adutwum, who disclosed this, noted that the government was committed to the education of teacher trainees and would do all it could to ensure smooth academic activities on the various campuses.

Dr Adutwum, who said this at the National Dialogue on Initial Teacher Education in Accra yesterday, stressed that there was no way the government would stop paying allowances to teacher trainees.

“We are committed to what we have promised to do and there are times when people say maybe it is about time we abandoned this idea of allowances for trainees. If you abandon it, what leverage do you have for that student to send him or her to Zabzugu?” he asked.

The dialogue, which ended yesterday, was on the theme: “Four years into the transformation of Colleges of Education into degree-awarding Institutions - Realities and the way forward.”

It was organised by the Colleges of Education Weekly Journal (CoEWJ) and attended by heads of the CoEs, representatives of mentoring institutions, churches, advocacy groups, stakeholders in the sector, among others.

Confirming the payment, as disclosed by the Education Minister, the General Secretary of the National Conference of Principals of Colleges of Education (PRINCOF), Bertinus Adams Kaleo, said the money was for two out of the sevenmonth arrears owed the institutions.

He, however, said it would help address some of the challenges the institutions faced.

The payment is the latest to be made to the CoEs this year.

Last April, the government released GH¢67,943,652 to the CoEs after the PRINCOF had expressed concern that the institutions were struggling to feed trainees, as funds for that had been in arrears for over six months.

The amount released then was to cover part of the arrears for the 2020-2021 academic year and the excess of GH¢100 million for feeding and also pay trainee allowances.

Before that payment, the Executive Secretary of PRINCOF, Dr Harriet Naki Amui, had, in a statement copied to the inister of Education, proposed that teacher trainees be made to start funding their own feeding from May 8 if funds were not made available to the CoEs.

At yesterday’s dialogue, Dr Adutwum emphasised the government’s commitment to support teacher trainees and dismissed the argument that abandoning the allowances would save the nation some money.

“We have to make a commitment to it and make sure that we give the resources to our teacher trainees,” he stressed.

Citing an example, Dr Adutwum said in the US, teachers who took loans to go to school and committed themselves to serve in deprived communities after training got their loans forgiven, “so it is still going to cost you”.

He also noted that as the sector minister, he was fully committed to what the government had promised and would work hard to fulfi ll that promise.

He said there was the need to develop the capacity of teachers and create a learning environment where the student felt empowered.

“Invariably, we have tamed students. We are hiding behind African culture to say that children have to be quiet, and, indeed, they are quiet and they are not empowered to ask questions to challenge the status quo.

“But if you at the colleges of education are doing same to the trainees, how do you empower them to be assertive?” he queried.

“When you require degree students to wear uniforms, how do you empower them to be assertive?” he asked.

The President of PRINCOF, Dr Emmanuel Nyamekye, mentioned some of the challenges facing the CoEs to include financing the colleges, staff attrition and infrastructural deficit.

He expressed the hope that the forum would help identify sources of support during every phase of the academic cycle for students.

“The key is to give trainees all the assistance they need to benefi t from the training courses colleges provide. Since we all expect trainees to perform at their peak in the classroom and positively change the face of education in Ghana, it is only fair that they are given the training resources to live up to their potential,” he said.