Ghana does not need GMO to ensure food sufficiency 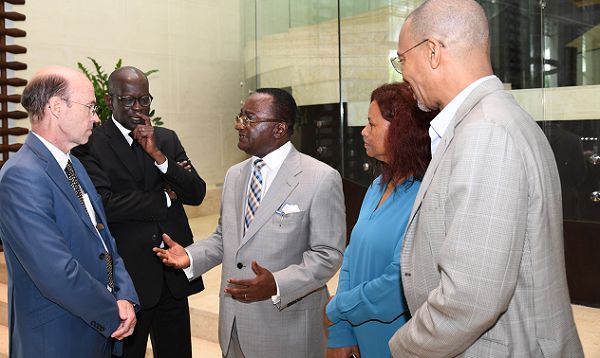 Dr Owusu Afriyie Akoto (middle), the Minister of Agriculture, interacting with some participants in the opening session of the WFP Country Directors meeting held in Accra. With them is Mr Abdou Dieng (2nd left), the Regional Director of the WFP. Picture: EBOW HANSON
30.5k Shares

Ghana does not need genetically modified organism (GMO) to ensure food sufficiency and security, as the knowledge it has accumulated in the discovery of improved seeds can boost food production, the Minister of Food and Agriculture, Dr Owusu Afriyie Akoto, has said.

Dr Akoto said this while answering questions on the issue of GMO in relation to improved seeds to champion the Planting for Food and Jobs initiative from a team of World Food Programme (WFP) officials in Accra yesterday.

The team comprised the country directors of the WFP from19 African countries and the head office of the programme in Rome.

The senior officials of the WFP are in the country for its bi-annual meeting which normally brings together country directors of the WFP in Western and Central Africa to share experiences and best practices.

The country directors, who are in the country for a four-day meeting, wanted to learn more about Ghana’s agricultural sector, especially the Planting for Food and Jobs initiative and how Ghana could share its best practices with other African countries.

Dr Akoto said the Ghanaian scientific community and academia had done a lot of work on improved varieties of grains, which had been left on the shelves because previous governments did not utilise them to improve agriculture in the country.

Describing GMO as a controversial subject, he told the WFP country managers that a section of Ghanaian society was seriously against it “and, indeed, we don’t need it”, explaining that what the country had in terms of improved seeds was sufficient.

He said the scientific community had researched into and currently registered over 58 different varieties of grains which could yield 10 times what ordinary grains could.

For instance, he said, an acre of traditional grains yielded four bags, while the same land size of the improved seeds could yield as many as 40 bags.

Dr Akoto said currently only 11 per cent of Ghanaian farmers patronised the improved seeds and fertiliser, adding that even with that the country could boast food sufficiency and was currently exporting grains to neighbouring countries.

For instance, he said, more than 100,000 tonnes of about seven different food crops were exported to neighbouring countries last year.

With the abundance of food, and as its commitment to ensure food security, the minister said, the government was making every effort to address the challenges of food storage facilities.

“We have embarked on ensuring that there is adequate storage infrastructure in the country to enhance the marketing of grains and trading on the commodity exchange. We wish to increase storage from 34,000 tonnes in 2017 to 250,000 tonnes in the next five years,” he said.

Impact of Planting for Food and Jobs

Earlier, while opening the four-day meeting, Dr Akoto had taken the participants through the government’s agricultural flagship programme, the Planting for Food and Jobs, which he said had generated interest in farming among the youth and resulted in the abundance of food and created job opportunities in the country.

He said President Nana Addo Dankwa Akufo-Addo intended to add more programmes to the current Planting for Food and Jobs.

The new additions included Planting for Export and Rural Development, Rearing for Food and Jobs, Mechanisation Centres for Modernisation and Efficiency and Growing Vegetables and Flowers.

Dr Akoto said with the Planting for Food and Jobs, not a single grain was imported into the country in 2018 and pledged that Ghana would consolidate the gains chalked up this year and in subsequent years.

He was happy that WFP activities in the country were in line with the national direction of trade, adding that its integrated food security and nutrition programme complemented those flagship programmes and appropriately supported Ghana’s current development phase and the grand vision.

Welcoming the guests, the WFP Regional Director, Mr Abdou Dieng, said the meeting offered a platform for knowledge exchange for country directors and served the purpose of enhancing dialogue and collaboration among the WFP headquarters, regional bureaux and country offices.

He explained that the WFP’s West and Central Africa Region was characterised by drought, poverty and population growth, while rising conflicts and the presence of non-state armed groups were hindering access for humanitarian and development actors.

He said in spite of all those challenges, with sustained support from partners and a dedicated workforce committed to saving and changing lives, the region was able to assist more than 10 million people in 2018 through emergency and development programmes.