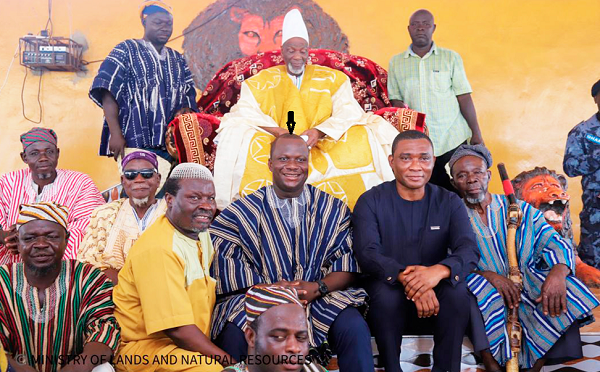 Mr George (middle), addressing the press. With him are Mr A. B. Fuseini (right), the Ranking Member of the Communications Committee, and Dr Sebastian Ngmenenso Sandaare

The Overlord of Dagbon, Ya-Na Abukari II, has pledged his support to the fight against illegal mining and deforestation, particularly in northern Ghana.

He said as the Overlord of Dagbon, he was concerned about the welfare of the people, for which reason he would support the government's quest to protect the environment.

The Ya-Na has consequently applauded the Minister of Lands and Natural Resources, Mr Samuel Abu Jinapor, for the efforts so far, adding that he would help the ministry to achieve its mandate and objectives.

Ya-Na Abukari made the statement when he received Mr Jinapor and his team during a visit to Tamale, the capital of the Northern Region, last Monday.

The minister lamented the increasing rate of deforestation in the region and called on traditional authorities to lend a hand in the fight against the menace to enable the region to regain its vegetative cover.

“Traditional authorities are the custodians of the land so I seek your support to preserve the landscape and forest of our country,” he said.

Mr Jinapor later directed the Forestry Commission and the Lands Commission to flush out individuals and entities that had encroached on forest reserves and public lands in the Tamale Metropolis.

“A city without forest reserves is not worth the name of a city. These forest reserves have been there for so many years, and suddenly we are seeing washing bays, drinking spots and shops springing up along the reserves,” he noted.

Mr Jinapor gave the directive when he interacted with staff of various agencies under the ministry in Tamale last Monday as past of his five-day working visit to the five regions of the north.

He was accompanied by the Deputy Minister of Lands and Natural Resources, Mr George Mireku Duker and the Deputy Chief Executive of the Forestry Commission, Mr Sulemana Nelson Nyadiya.

Forest reserves in the metropolis such as the Aboabo and Agric reserves appear endangered as the areas around them have become refuse dumps, while shops, drinking spots and washing bays are also common sights along the reserves.

Mr Jinapor indicated that the Regional Security Council and the ministry would soon map out aggressive strategies to nib the growing menace in the bud.

He, therefore, warned all encroachers to pull down their structures and relocate or face the wrath of the law, stressing that “we cannot afford to allow all forest reserves to be encroached upon”.