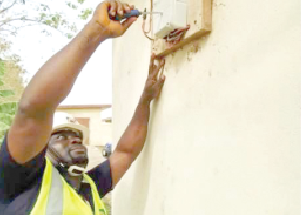 The Northern Electricity Department (NED) of the Volta River Authority (VRA) loses 45 per cent of power every month, translating into GH¢ 8.4 million through illegal connection or theft in Tamale in the Northern Region, the Chairman of the VRA/NEDCo Branch of the Senior Staff Association, Mr. William Kwame Asare, has revealed.

In addition, he said out of the 23,000 prepaid meters procured for installation, only 4,000 had been installed so far because personnel of NEDCo were not being allowed to install the gadgets.

In view of the threats posed to the staff in carrying out their duties to, among other things, deal with illegal connection, Mr. Asare told the Daily Graphic that NEDCO staff had withdrawn their services until they were assured of total security against of the residents of Tamale for its members.

He said although the regional minister and police commander had given staff some assurances, staff would need the assurance of community members to protect them from attacks to enable them to go about their legitimate duties.

“There should be a firm commitment and assurance from all relevant stakeholders about the safety and protection of VRA/NEDCo staff and properties. It appears that some residents in the Tamale Metropolis are bent on preventing VRA/NEDCo staff from doing any revenue mobilisation activities.

“VRA/NEDCo is losing 45 per cent (GH¢8.4m) of the power sales monthly in Tamale alone, primarily due to power theft. We, the staff of VRA/NEDCo, resolve that our lives are under threat and we don't feel safe to go out there and work. We will, however, report to the office and carry out office assignments. Our resolution shall remain until the above listed demands are met and our overall safety guaranteed,” an earlier statement signed by Mr. Asare and the Union Chairman, Mr. Abass Zakaria, said.

It said the leadership of the VRA/NEDCo Staff Groups wished to submit the resolution which was passed at an emergency meeting held with members of staff in the Northern Area in Tamale for the immediate withdrawal of some services in the Tamale Metropolis and its environs.

The resolution, it said, had become necessary in view of the recent attacks and vandalisation of the Tamale Northern Area Office of NEDCo, and private vehicles by some irate youth of the Tamale Metropolis.

The statement said many of such attacks on staff and property of VRA/NEDCo had occurred within the Tamale Metropolis in the recent past, and cited the “assault on staff at Lamakara, a suburb of Tamale, in 2016 whiles in the company of police personnel to invite customers who had reconnected themselves after being disconnected for illegal connection”.

In addition, it said there was assault on staff and the deflation of tyres of company vehicles at Dohinayilli, a suburb of Tamale, in 2017 while in the company of police personnel to invite customers who had reconnected themselves after being arrested for illegal connection.

Moreover, it mentioned attacks and vandalisation of VRA/NEDCo office by some youth in Tamale in 2015 and assault on VRA/NEDCo staff at Vittin, a suburb of Tamale, whiles on official assignment to disconnect some street lights installed illegally in 2019 by the Assemblyman.

“Following the unfortunate alleged assault on some customers by police personnel in the company of VRA/NEDCo staff for illegal connection monitoring activities, there have been several threats in the form of viral videos and audios issued by some youth in Tamale against staff and property of VRA/NEDCo. These threats have been actualised with the assaults and vandalisation that occurred on Saturday, September 25, 2021,” it said.