Takoradi kidnapped girls... We know where they are — CID 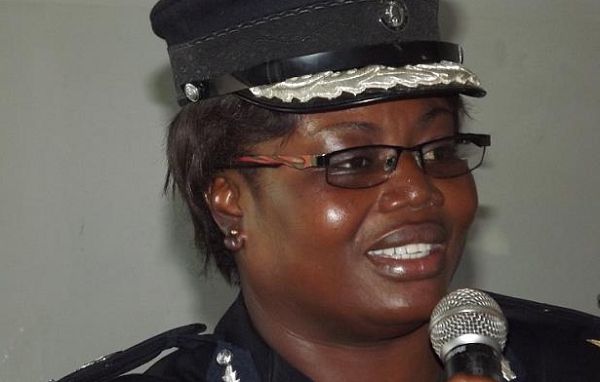 The Criminal Investigations Department (CID) of the Ghana Police Service says it now knows the whereabouts of the three Takoradi kidnapped girls.

The Director General of the CID, Deputy Commissioner of Police (DCOP) Mrs Maame Yaa Tiwaa Addo-Danquah, who revealed this in Accra, said after months of painstaking investigations, together with the Bureau of National Investigations (BNI), the CID had been able to find the location of the three girls who were all alive and well.

She appealed to the families of the victims to “keep on keeping on”, as they had been desperate for news of their daughters and their whereabouts since the first, Priscilla Bentum, was kidnapped in August 2018.

At a press briefing yesterday, the CID Boss said she could not disclose the exact location of the girls, as doing that could jeopardise their safety, but gave an assurance that the police were working together with other stakeholders to bring them back safely.

Mrs Addo-Danquah said following the disappearance of the girls — Ruth Love Quayson, 18, a graduate of the Fijai SHS in Takoradi; Priscilla Blessing Bentum, 21, a student of the University of Education, Winneba residing at Kansaworodo, a suburb of Takoradi, and Priscilla Mantebea Korankye, 15, a student of the Sekondi SHS who was kidnapped around Kansaworodo — investigations suspect, Udoetuk Wills, a Nigerian, was arrested, and although he denied any knowledge of the case he mentioned one John Nweke as the one keeping the girls.

The suspect had since been put before court and remanded in custody, while investigations continued.

Mrs Addo-Danquah said three notorious armed robbers who attacked the 10 Britons who arrived in the country on a charitable mission, in collaboration with a British NGO, Partner Africa, based in Ghana, on December 7, 2018 had been arrested.

According to her, on arrival at the Kotoka International Airport on that day, the 10 Britons, five males and five females, were conveyed to join two of their compatriots at Kokrobite, where they were attacked by the three-member robbery gang with pistols and machetes.

They robbed the foreigners of 11 mobile phones, credit/debit cards with personal identification numbers (PIN), a mini iPad, gold wedding rings and GH¢940,000, she said, adding that as if that was not enough, the robbers raped all the five young ladies who arrived that night and a British lady resident at the place.

The CID Director General indicated that after three months of intelligence gathering, surveillance and in-depth investigations, the two prime suspects — Ishmael Akyene, alias Nana Israel Damascus, a driver, 34, and Daniel Akpan, a Nigerian driver, also 34 — were arrested at Akweley, near Kasoa, and Kwashieman, respectively, on March 9, 2019.

She said a third accomplice, identified as Asuquo Mboutidem Edem, alias Faith, a Nigerian, was, however, on the run and an intensive search had been mounted for his arrest.

Upon interrogation, the two arrested suspects admitted to the offences and recounted other robberies and rape they had committed before and after the Kokrobite incident, with majority of the cases centred around East Legon and its environs.

They made away with jewellery worth over $100,000 and more than $200,000 in cash from seven robberies they undertook around the area, she said.

Mrs Addo-Danquah said following the gruesome murder of the Tiger PI investigative journalist at Madina in January this year, two key witnesses assisted police forensic artists to come up with two artistic images which confirmed the resemblance of the assailants.

She said 13 people had so far been interrogated in connection with the murder and statements taken from them to assist in investigations.

They included a former Chairman of the Ghana Football Association (GFA), Mr Kwasi Nyantakyi, who was implicated in the Number 12 documentary on football; the Member of Parliament for Assin Central, Mr Kennedy Ohene Agyapong, and the Head of Tiger PI, Mr Anas Aremeyaw Anas, she added.

On the Menzgold saga, Mrs Addo-Danquah said the police were yet to formally charge and put the embattled boss of the gold dealership company before a court in Ghana because Nana Appiah Mensah, also known as NAM1, was facing other charges in the United Arab Emirates (UAE).

The CID Boss indicated that until the case in Dubai had ended, the Ghana Police could not get hold of him, explaining that NAM1 was granted bail on March 25, 2019 but he was able to execute the bail and his lawyers obtained the letter for his release.

She said due to the red alert notice on him, he was re-arrested on the instructions of INTERPOL and the Dubai Police had gone ahead to obtain a local warrant of arrest based on the INTERPOL red notice.

He was currently in custody at a Dubai police station and that even though he was on bail, the case had not ended, as the police would continue to produce him before the court until that case was over before he would be handed over to Ghana, she explained.

“We are in touch with the Dubai Police and everything is on course,” Mrs Addo-Danquah stated.

Several protests have been held by aggrieved customers of Menzgold to demand the arrest and punishment of the embattled CEO but not much attention has been given to the customers, who have accused the government of neglect and insensitivity to their concerns.

The CID Boss also touched on the murder of the Head of Public Affairs and Marketing at the Tema Port, Mrs Josephine Tandor Asante, who was found dead in her room at EMEFs Estates at Afienya, near Tema, by her son.

He said the deceased’s driver and her houseboy had been arraigned, based on their complicity in the murder.

They were arraigned before the Tema District Court and remanded, while the DNA of one of the suspects had been taken for analysis at the Police Forensic Laboratory, as well as the call records of the deceased and the suspects.