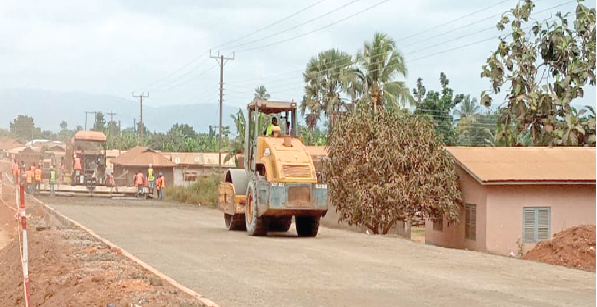 Work on the Ho dual carriageway in progress

Some roads in the Volta Region are receiving maintenance works, in accordance with the government’s promise to make this year a ‘Year of Roads’, with focus on constructing and rehabilitating critical road infrastructure in the country.

Among the towns where roads are undergoing a facelift are Ho and Hohoe.

That notwithstanding, sections of the Eastern Corridor Road which were listed as being critical were yet to see action being taken on them.
The sections are the 45-km Asikuma–Have road, the 53-km Have-Hohoe-Sokode-Bame road and the 99km Ho-Dzodze-Denu road.

The 10.5-km Ho dual carriageway which is currently being worked on is estimated to cost GH¢98 million on completion.

It begins from Sokode-Gbogame, which is an entry point to Ho, and ends at the Ho Civic Centre.

Another road in Ho that starts from Sokode-Etoe through to the University of Health and Allied Sciences (UHAS) and Titrinu, covering 10.5km, is being developed at a cost of GH¢28 million.

The Daily Graphic toured some of the roads this week and was informed by officials in charge that the combined work done on the roads in Ho was at 43 per cent.

Meanwhile, sections of some of the roads have been opened to traffic while work is still ongoing.

The Volta Regional Director of the Ghana Highway Authority (GHA), Mr Philip Agbati, in an interview with the Daily Graphic, said there was no serious work currently ongoing on the roads in the region listed by the government as critical except for normal routine maintenance works.

“There are works going on, but they are routine maintenance works. The government is, in the meantime, sourcing for funds to begin construction works on the dominant roads and make them motorable,” he said.

He said work on the critical roads, such as the Sokode-Bame, Ho-Dzodze-Denu and Dufor Adidome-Asikuma Junction roads and sections of the Asikuma-Have road had not begun yet because contracts were yet to be awarded for them.

He disclosed further that the construction of a bridge over the Volta River at Volivo, as part of the redevelopment of the Eastern Corridor road, was yet to start, even though the processes for construction work to begin had started.

Speaking about progress of work in six municipalities in the region, the Volta Regional Director of the Department of Urban Roads, Mr Edward Annan, said one lane of the Ho dual carriageway was expected to be completed before the end of the year.

He said work on the 2.4-km Klefe road in the Ho municipality was progressing steadily, while contracts had been awarded for the upgrading of five kilometres of roads in Ketu South, Akatsi and Ketu North.

He said contractors for the projects were mobilising to go to site.

Meanwhile, in all those areas, there were routine maintenance works, such as de-silting of drains, patching of potholes, among others, going on.

Some residents of the region have reacted in different ways to the situation. While some are unhappy because nothing was happening in their areas, others commended the government for initiating the works and hoped they would be completed in good time.

Some also complained about the deplorable road from Peki to Kpeve, which has affected the transportation of food crops from farms to market centres.

Mamavi Sowu, a trader at the Kpeve Market, expressed disappointment about the bad roads which she said had negatively affected her business because drivers plying the route had increased haulage fares.

Commercial drivers are also not happy because of the high cost involved in maintaining their vehicles.

A section of residents of Ho are, on the other hand, happy to see contractors back on-site and working to fix the town roads.

Speaking to the Daily Graphic regarding the Ho dual carriageway, Mr Prosper Alorto, a commercial driver who plies the Hohoe-Accra road, said he expected that the roads would be fixed before the end of the year.

“The project was supposed to span 18 months and we were told it would have been completed in October but it is still under construction,” he said.

On his routine inspection of ongoing road works in the region, the Volta Regional Minister, Dr Archibald Yao Letsa, described the road sector in the region as “very challenging” but assured the people that the roads would see an improvement.