CSOs advised to be circumspect in criticism of security matters 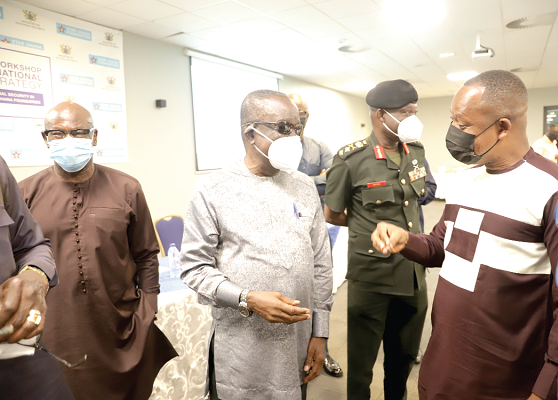 Civil society organisations (CSOs) have been advised to be circumspect in their criticism of issues bordering on national security.

The Minister of National Security, Mr Kan-Dapaah, who gave the advice, however, said the government welcomed constructive criticisms that would ensure peace and national harmony, adding that CSOs continued to contribute significantly to the shaping of government policies through suggestions and interventions.

According to him, ensuring sustainable security and stability of the country depended on the collective effort of all, including CSOs.

Mr Kan-Dapaah gave the advice at a sensitisation workshop for CSOs in security on the recently launched national security strategy document in Accra yesterday.

The workshop, organised by the National Security Ministry, with support from the STAR Ghana Foundation, provided a platform for the CSOs to deliberate on and explore ways of building partnerships for the successful implementation of the strategy, which was launched on June 7, this year.

The document consolidates fragmented initiatives on security into an integrated national security policy framework aimed at preserving the sovereignty of the country and also ensuring sustainable development and national cohesion.

The strategy puts emphasis on citizens and local communities as the primary reference objects of national security planning and delivery.

"There is now a paradigm shift from excessive focus on state security to human security and this shift has occasioned a change in how our security architecture should function. This approach is reflected in the new national security strategy," he said.

As a result, Mr Kan-Dapaah said, respect for human rights would be enhanced, as the citizenry too had responsibility for respecting and supporting public security officials.

He commended the STAR Ghana Foundation for the workshop, which he said would help demystify issues of national security.

He also expressed appreciation to security experts of the various political parties, especially those of the leading opposition party, the National Democratic Congress (NDC), for contributing to the development of the strategy.

The Executive Director of the STAR- Ghana Foundation, Mr Ibrahim-Tanko Amidu, said the strategy would serve as a tool that could be used by CSOs to hold the government accountable.

"The best way to use the document as a tool for accountability is to ensure that as many people as possible know the content," he said.

Mr Amidu said it could also serve as a development strategy document, since growth could not take place in an insecure environment, adding: "Peace, security and stability are key requirements of development."